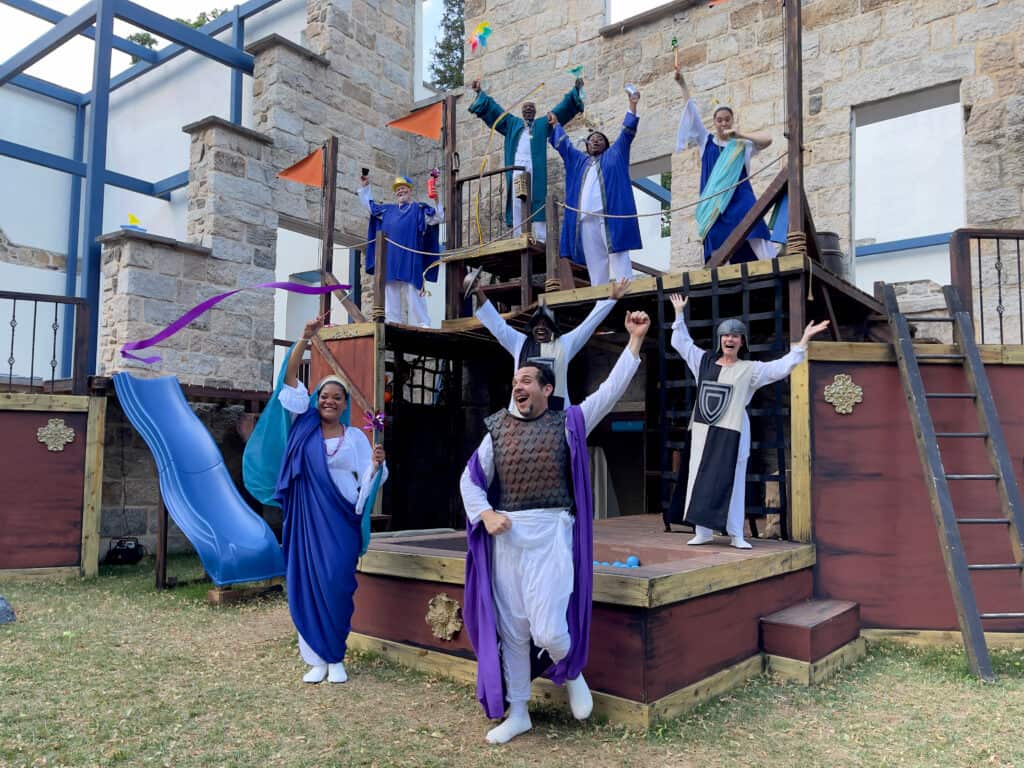 I first attended an outdoor theatrical performance 64 years ago. Over the decades, there have been plenty more. Up until Saturday evening, I’d never once been rained out. Saturday, though, my string of good luck came to an end, somewhere towards the conclusion of Shakespeare’s Pericles, presented by the Chesapeake Shakespeare Company at its traditional summer home, the Patapsco Female Institute ruins in Ellicott City. It wasn’t a terrible storm, just a sprinkle that morphed gradually into the kind of persistent rain that gently tells a viewer “Go home now.” Management bowed to the inevitable, and so this one went into the record books as “called on account of rain.”

I think everyone left contented anyway. It wasn’t the kind of play, and it certainly wasn’t the kind of occasion, where a few minutes less would subtract much from the charm of the evening. We’d had more than the theatrical equivalent of our fifteen outs, and it felt like a regulation game, even lacking an inning or two. For most of the crowd, as for me, it had been the first live and in-person theatrical performance in at least 16 months. The simple pleasure of being in a live audience, mostly maskless, made lagniappe of almost everything else.

But the show itself certainly didn’t hurt. It is all about starting hopefully anew, something the play’s namesake Pericles must do again and again. This makes it great for inaugural performances, as the London theater world seemingly recognized when (as a CSC press release mentions) Pericles was the first Shakespeare play chosen to be revived there in 1660, after a 16-year hiatus imposed on all theatrical activity by the Puritans. (And you thought 16 months was hard!) There may have been other considerations in 1660; in keeping with Restoration mores, it may have shocked audiences a bit with its references to incest and prostitution, and this naughty semi-explicitness may have also been thought a poke in the eye for the then-late and definitely unlamented Puritans. But for modern audiences these things come across more as plot points discussed in strenuously opaque language (meaning that in this kid-friendly production, no childish ears will be offended) rather than serious sordidness. No, Pericles seems like an epic of hopefulness, reason enough to kick off a resumption of theatrical business with this show.

Given all the slapstick in this staging (jousting with pool noodles, silly sound effects, outrageous costumes, sending a coffin to a sea burial down a playground slide, tossing a babe-in-arms around like a fumbled football), the endless choruses of What Shall We Do with the Drunken Sailor in which the audience is encouraged to participate, the deliberately absurd doubling, it might almost seem at times that children are the target demographic here. But grownups will not be bored.

It is not a reverent handling of Shakespeare, to be sure. But Pericles probably wouldn’t support a reverent handling. Most of it is just not well-written. The first two acts probably weren’t even penned by Shakespeare – and it shows. Much of the language is so obscure I’d guess that every member of the audience is sometimes relying on context rather than the lines to understand what’s going on – although “what’s going on” is kind of a nebulous concept anyhow. The plot is ludicrous, a picaresque travelogue following the eponymous Pericles (Jose Guzman) as he pinballs around the eastern Mediterranean (I counted scenes in six towns before I lost track), trying to dodge assassins and pirates, win the girl, survive a shipwreck, prevail in a tournament, and locate lost family members, among other things. I doubt the Bard had a serious bone in his body while he wrote it, but even if he did, director Matthew R. Wilson and his cast certainly don’t while they’re performing it. Whatever seriousness Shakespeare may have had will just have to await a different staging.

Pericles himself aside, it would be pointless to single out enactments of particular roles by individual cast-members for comment. The characters flash by as quickly as the locales, and each member of the troupe (Deimoni Brewington, Steven Hoochuk, DJ Horne, Chania Hudson, Lolita Marie, Molly Moores, and Elizabeth Ung) fields several of them. They are all game as can be, and that’s all a reasonable audience would need or ask for amongst the foolery.

Well, except for better weather.