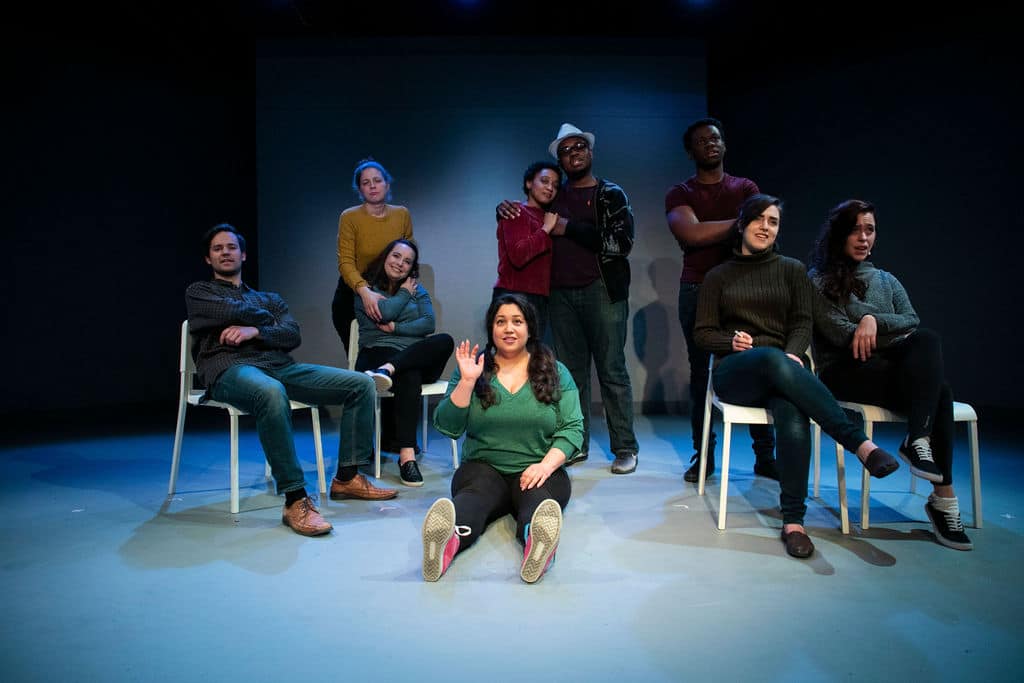 It seems wrong to call Caryl Churchill‘s Love and Information, now at Fells Point Corner Theatre, a play. While that word can embrace a lot of different kinds of dramatic performances, Love and Information lacks the plot, cohesion, or character development to qualify as a play. Perhaps we are stuck with the more general term “theater piece.” However it’s characterized, reviews of the show (and there have been lots of productions reviewed since its West End premiere in 2012) tend to start with some numbers, and I shall do the same, because they can give a sense of what awaits the theatergoer who takes it on. This 90-minute (intermissionless) show calls for approximately 100 unnamed speaking parts (which may be apportioned among few or many performers), and takes place in seven “sections” cumulatively comprised of 57 scenes, plus some stray optional ones. The scenes may be performed in any order within a section. There is no shared timeline or set of characters among them, though there are some thematic coherences.

Principal among the coherences is a preoccupation with information. Some reviewers have suggested that it is a commentary on information in today’s world, filled with distinctively modern information and disinformation sources like the ubiquitous cellphone. However, there is plenty of focus on information and disinformation that come from sources nearly as old as time, e.g. starlight reaching us after millions of years of travel, the warped information received from the senses of a paranoid schizophrenic, or (what seems to be the source of the work’s title) the act of lovemaking, which feels as if it has its roots in love, here reenvisioned as simply nature’s way of reshuffling and mingling two funds of DNA information to obtain an original blueprint for building a human.

The information may be hidden; a secret is disclosed, but out of the audience’s hearing. The information may be confusingly malleable; three Chinese ideographs yielding multiple meanings depending on how they are ordered in a graphic. The information may be encoded in memory, which may seem a secure place (as in a scene about dissecting chicken brains to locate traces of their memories) or frustratingly demanding to retrieve (as in a scene about the effort to protect memories by building a “memory house”). It may be unreliable, as the information extracted from torture is discredited by the torturers. Indeed, the audience’s perception of when the show is happening may itself be unreliable, as certain pre-show occurrences turn out to be part of the show.

On the score of love, the show seems simpler: so far as I could see, there was little controversy amongst the presented scenes raising any questions that love is something we need. It was a somewhat shocking, however, to see the need being satisfied in one scene by a computer automation.

As I think the above discussion should make clear, Churchill’s take on love and on information, synthesized from all these dramatic snippets, seems a bit chilly. There may be a lot of both love and information out there, she appears to intimate, but it’s not usually of very good quality. Much of Churchill’s frostiness is, however, presented with a comic touch, emphasized by Dierdre McAllister’s direction, by the energetic and youthful ensemble (Nina Kearin, Megan Livingston, Willard Brewington III, Isaiah Mason Harvey, Michael Makar, Caitlin Weaver, Autumn Koehnlein, Carolyn Koch, and Jess Rivera, pictured above), and, at least on the evening I saw it, by the audience, which seemed to be goading on the performers with constant and frequently loud laughter. Other directors, I’m told, have played more heavily on the opportunities for seriousness and pathos, and used casts with more age and accompanying gravitas. As with so much else about this show, however, there are few right or wrong choices for how to do it, at least not in Churchill’s mind.

This is certainly not a show for everyone. But I liken it to the mixture of novelty and familiarity you get at a 10-minute play festival: if you’re not enjoying yourself at any given moment, something new will be along any second now, though it will be the same comfily-familiar ensemble presenting it to you. If that’s what you like (and many of us do), this show is for you.