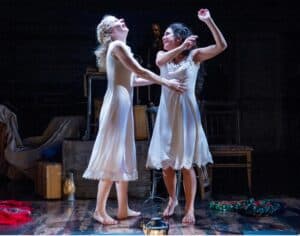 Paula Vogel‘s 2015 play Indecent, in a production now arrived at Center Stage after stops at D.C.’s Arena Stage and the Kansas City Rep, is a staggering tour de force of playwriting prowess that is also a tour of a largely forgotten world: international Yiddish theater shortly after the turn of the last century. A play about a play about a play, it follows Sholem Asch‘s God of Vengeance on a circular path, from Lodz, Poland in 1906 to Warsaw, to various stages in Europe, through Ellis Island and various New York theaters, culminating with an abortive stay on Broadway, and thence back to Lodz once more, at the peak of the Holocaust. And then, in a sort of coda, it concludes in Connecticut with the last days of Mr. Asch. All these parts are contained within an initial framing device in which, like Pseudolus in A Funny Thing Happened on the Way to the Forum, a stage manager named Lemml (Ben Cherry), introduces the players and musicians, apparently members of a turn-of-the-century Yiddish theater troupe, and identifies the kinds of parts they will play (like male and female Ingenues). Everything that follows, i.e. a play about presenting a play, is presented as a play performed by this troupe.

Almost immediately, though, Indecent immerses us in the most interior play, the Asch play itself, as certain scenes are repeatedly reenacted, to make us see and feel why the play mattered so much in the world it came into. God of Vengeance was scandalous because it acknowledged the existence of prostitution in the Jewish communities of Eastern Europe and depicted in a positive light the love affair of a brothel-keeper’s daughter and one of her father’s prostitutes, and because it ended with the desecration of a Torah scroll. At a time when Jewish communities reasonably worried about how they were perceived by their neighbors, the commercial and emotional truths Asch told, though scandalous, were both also astringent and liberating. This is brought home to us in the early going by the first readthrough of Asch’s play in the Warsaw salon of I.L. Peretz (Victor Raider-Wexler), where the consensus is that the author should burn his play – but Lemml, the provincial bumpkin brought to the salon by unlikely chance, is blown away by God of Vengeance, so much so that he makes a career out of stage-managing its successive productions as it premieres and begins to be produced around the world.

In his theatrical endeavors Lemml internalizes a lesson which one suspects is Vogel’s ultimate message: “A play belongs to the people who labor in it and the audience who put aside the time to be there.” By necessary implication, it does not belong to the playwright. And in the case of God of Vengeance, Asch (portrayed as a young man by Max Wolkowitz and as an old man by Raider-Wexler) does something close to abdicating his ownership, failing to fight the cuts that were made when the play came to Broadway in 1922 to render it more palatable to the less adventurous theatergoers expected in that venue, and then refusing to testify at the 1923 trial that ensued when the authorities came to shut the Broadway production down for indecency. (Vogel ascribes Asch’s disengagement to a refocusing of Asch’s literary interests on fiction and to a looming dread as the Holocaust was taking shape.)

But if Lemml is right, then God of Vengeance belonged to its players and its audiences anyway – and Indecent belongs to us, today’s audience. And what is it that belongs to us? This strange, sprawling play is hard to capture and summarize. It’s about lesbian passion, though we mainly see that passion at a remove: enacted by the performers in the troupe, not necessarily felt by them. Asch, the playwright who writes it, is a man, as is Lemml, the character the most palpably touched by it, while the most clearly lesbian character in Indecent, the actress (Susan Lynskey) who plays the prostitute Manke in God of Vengeance, seems more workmanlike than personally involved in the story of Manke’s passion. That said, a rain-soaked tableau (seen in the photo above) of Manke and the whoremaster’s daughter Rifkele (Emily Shackelford) confessing their mutual attraction is introduced early and re-enacted later, and is the emotional high point of the Indecent, as it probably was of God of Vengeance. At however many removes, the passion comes across.

Indecent is also about the pressures and anxieties of a Jewish community defensively trying to manage its image while under attack. It’s about the power of theater and the fraternity among theater people. It’s about the Holocaust. It’s about, perhaps, the need of a writer to divorce himself from earlier work and continue to develop.

Mostly, though, it’s about the power of theater to dazzle and uplift. And by showing what that power looks like, Indecent (hard as it is to describe) is itself dazzling and uplifting. In an interview with the New Yorker, Vogel discussed her favorite moments recruiting students for a playwriting course she was teaching at Brown. These happened when she would read a script and “the hair went up on the back of my neck, but I didn’t understand how they did it[.] I would call the writer and say, ‘Will you come to Brown and explain it to me?'” That is exactly what Indecent does: makes the hairs stand up on the back of the neck, and we may be at a loss to explain.

The three-piece Klezmer band (John Miosich, Maryn Shaw, and Alexander Sovronsky) that performs the bulk of the music in the show is often propulsive, particularly when backing up the occasionally choreographed movements of the cast.

Though Vogel was the playwright, she acknowledges the important contributions of Rebecca Taichman, author of a play about the obscenity trial of God of Vengeance, and director of the original production.

There is an interesting piece on the HowlRound website by Warren Hoffman, whose book The Great White Way, about race in the American musical, I greatly admire. Hoffman scrutinizes the lesbian love story in God of Vengeance, concluding that because of the cuts to the script, the supposed immorality that got the play in legal trouble had to do more with the general sexual knowingness of the play than with its specifically and mostly missing lesbian content – and that it was the absence of specific content that ultimately got the conviction reversed on appeal (a fact Vogel’s play apparently leaves out). Hoffman also says that “lesbian” is a term and also, for the most part, a concept contemporary audiences in 1906 or 1923 would have been unfamiliar with. But the kiss would have been scandal enough.