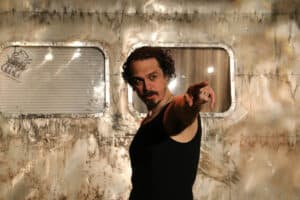 Jez Butterworth writes big and with great talent. His play The Ferryman, now packing them in on Broadway, calls for 21 actors with speaking parts, combines a full domestic drama with a Jacobean-style tragedy that ends with corpses strewing the stage, and has some fairly profound things to say about Irish history. Butterworth is co-author of one of the best James Bond screenplays, which as a genre are the acme of sheer scale. And his earlier drama Jerusalem, now being presented at Fells Point Corner Theatre, features three full acts, 14 non-double-able parts, a set chaotically cluttered with enough objects to drive a props mistress insane – and it also delves forcefully into questions of English identity.

Because of its size and its intellectual heft, Jerusalem would be daunting material for any community theater, particularly any American one whose performers will not be as conversant as their transatlantic cousins with British geography, customs, politics, slang or accent, but Fells Point Corner, the best of Baltimore’s community theaters, rises well to the challenge. In particular, the company is fortunate to have Ian Blackwell Rogers (pictured above) to play the difficult central role of charismatic, iconoclastic roisterer, drug dealer, and incidental nurturer of youth Johnny “Rooster” Byron. The part was originated in London and New York by Mark Rylance, for whom it was written. I’ve seen Rylance’s performance only in video clips, but Rogers seems no less able than Rylance to convey how dissipated and irresponsible, and yet funny, unpredictable and magnetic Rooster can be.

Rooster is a lot of things: a gypsy, a bad father to his own child yet a good father-figure to lost teens from his own rural Wiltshire, defiant of authority yet unable to muster any power greater than poetry and a talent for outrageousness to back up his defiance, an inveterate teller of tall tales and a drunkard who unapologetically conceives of those traits as creditable and also representative of the better angels of Britain’s nature. He might be a modern successor of Sir Toby Belch of Twelfth Night(substituting vodka, marijuana and cocaine for Toby Belch’s “cakes and ale”). (And for good measure throw in a touch of the lower-class outsider status of Jimmy Porter of Look Back in Anger.)

Carrying the Twelfth Night analogy further, the Malvolios of this piece would then be Ms. Fawcett and Mr. Parsons (Heather Johnston and Justin Johnson), who represent the local government, coming imminently to bulldoze as an “unauthorised encampment” the trailer and environs where Rooster makes his home. These two may operate with comical officialese lingo and broadly telegraphed and perhaps hypocritical disapproval of Rooster and his doings, but they are not going to be as easily discredited as Malvolio; they are coming back the next day with the machinery and police constables needed to destroy Rooster and his way of life. They are going to have the last word. Nor are their complaints entirely superficial. Ms. Fawcett reminds Rooster that in one of his hijinks he locked a colleague of hers in a shed without food or water for a week, which strongly suggests the applicability of the old saw that it’s only funny till someone gets hurt.

Nor is it just official intransigence blocking Rooster and his friends. They are up against the broadest of social trends. Rooster’s woods are fated to be turned into an “estate,” i.e. a housing development. And the petition of a group of neighbors at an existing neighboring estate complaining about the drug-dealing, the partying, and the trash at Rooster’s trailer has given officialdom the excuse it seeks to move against him. He is not losing just his trailer and his home; his homes away from home, the local pubs, have also been turning their backs on him. His good buddy Wesley (Michael Salconi), who owns the last drinking hole from which Rooster had not been barred, tells Rooster (directly after the two had been sharing an extended intoxicated and sentimental but horny recall of various May Queens of years gone by, no less): “You’re barred, mate. I don’t want you near [my bar] till further notice. I can’t have that nonsense going on. It’s a family pub. We have standards. Professional standards. Have I made myself clear?” Rooster’s fundamental foe, then, is nothing less than the gentrification of rural England.

Nor is it only Rooster being displaced; his young pal Lee (Nate Krimmel) is decamping for Australia for reasons Lee can barely articulate. But Davey, a young abattoir worker (Terrance Fleming) spells it out for him: “That is the fat lady singing.” And Lee can articulate it in terms of Davey’s life if not his own: “You’re going to live your whole life with the same fucking people, going to the same shit pubs, kill two million cows, and die a sad, fat povvo.” It is to avoid that fate that Lee is leaving.

Butterworth has given the dramatic clash of cultures added heft by stacking on an enormous amount of symbolism. The play takes place on St. George’s Day, the feast of England’s patron saint, and the occasion of the local fair, complete with morris dancing and parade floats. In other words, on a quintessentially British day. To whom does this day belong? Perhaps in part to Rooster and his crew. Wesley the publican shuttles back and forth between the morris dancing he has been forced by the brewery to participate in and his mates at the encampment. But fair is officially “sponsored by John Deere Tractors and Arkell Ales,” so an unspontaneous commercialism is never far away.

To make the symbolism even heavier, the play’s title, Jerusalem, of course refers to William Blake‘s hymn which has become an unofficial English national anthem, the central conceit of which is the equivalence of the Jerusalem of the Book of Revelation, the providential divine kingdom that is to come, with the country as Blake hoped England would become. As the play starts, the song is sung by Phaedra, one of the teens Rooster has been sheltering (Molly Cohen) (in her case from a stepfather the script suggests has been sexually abusing her). Phaedra is dressed as a fairy with gossamer wings, as the fair’s outgoing May Queen. So again does the Fair and by extension England belong to her and to Phaedra’s protector Rooster? Or does it belong to her brutal stepfather Troy (David Forrer)? Before the play ends, Troy makes a rather convincing case that the country belongs to him and his ilk.

But if Rooster will ultimately prove incapable of (in Blake’s words) “buil[ding] Jerusalem in England’s green and pleasant land” he can at least become a martyr to the cause of doing so. It is not going too far to say that when, late in the play, he appears with stigmata of a sort, we are to recognize Christ imagery. But Rooster makes for a rather pagan Christ, ending the play with a powerful invocation of his Romany roots and gods and heroes.

A review of this length cannot mention all the riches of the play, or even of this production of it. Audiences will have to go and see for themselves. But it would be ungrateful not to say that the cast are all wonderful and convincing, including David Shoemaker as Rooster’s often-stoned friend Ginger; Sean Coe as the even-more-stoned Professor; Kelly Hutchison and Dylan McKenzi as youngsters who are somewhat under Rooster’s wing; and an extremely touching Carolyn Koch as Dawn, mother of Rooster’s son, who may carry a bit of a torch for Rooster, but who, like England, seems to have moved on. (And with one exception, the cast all maintained convincing British accents throughout.) It would also be churlish not to tip the hat to Chris Flint, the set designer; his realization of the complicated chaos Butterworth had in mind will definitely bring a smile.

Even though sometimes funny, even to the extent of farce, and filled with a manic vitality, Jerusalem is challenging, not only because of the accents and the cultural references American audiences may miss, but also because of the dense texture of Butterworth’s treatment of the symbols and the issues. It is not easy theater, but it is infinitely rewarding. It will be surely be one of the most ambitious shows local audiences see in this new year.