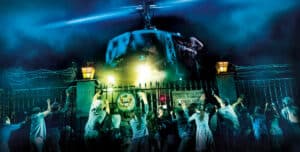 There are few entertainments as popular as Miss Saigon (36 million attendees worldwide since it premiered on London’s West End in 1989), and few that have occasioned as much controversy. Despite all that popularity, this reviewer had happened never to see the show until the current national tour surfaced this last week at Washington’s Kennedy Center. Miss Saigon‘s reputation for controversy had preceded it, however, and I was on the lookout for offensiveness. But what I saw was a well-honed crowd pleaser with spectacular stagecraft, excellent singing, a few catchy tunes, and a compelling plot. Some of the provocations complained of in earlier productions are no longer in evidence. In other instances, I would dispute that the material was ever objectively offensive. I’ll discuss all this below, but first, some basics.

When artists in different media continually return to one story, we can be pretty certain there is something powerful and elemental about it. Puccini told the tale here before in Madame Butterfly, the tragic story of a Western military man and an Asian lover and the child they conceive. It is not insignificant that Butterfly was itself a reworking of a stage play, which in turn was adapted from a short story based on an 1887 novel. Miss Saigon, as is well known, moves the tale from late 19th Century Japan to the end of the Vietnam War. The resituated setting gave the show’s creators Alain Boublil and Claude-Michel Schönberg (the Les Misérables team) scope to explore additional concerns: war, prostitution, international boundaries, war orphans, and the history of the Vietnam conflict. Boublil and Schönberg take full advantage of this opportunity. In today’s environment, the show’s harsh focus on international boundaries, on the peril they pose to the excluded, and on humanitarian efforts to relieve that peril, seems especially poignant. But the heart of the story remains the tragedy of the Asian lover left behind.

In its latest outing, the show stars Emily Bautista as Kim, the bargirl heroine; Anthony Festa as Chris, the GI who loves and loses her in the fog of war; Red Concepción as the Engineer, the half-Vietnamese, half-French dance hall entrepreneur and pimp; and Stacie Bono as Ellen, the American wife Chris takes after he returns to the U.S. from the War. They are all rock-solid, particularly Concepción, whose ebullient creepiness and unbridled narcissism is frequently hilarious.

With that said, what about the controversies?

I observed above that some of them are no longer applicable. In the original London and New York productions, there was much unhappiness over the white actor Jonathan Pryce donning prostheses and yellow-face to take on the role of the Engineer, so much so that when America’s Actors’ Equity refused to sanction Pryce for the role on Broadway, producer Cameron Mackintosh canceled the show, and only brought it back after Actors’ Equity relented. Since those original productions, however, all Engineers, including Concepción, have been of Asian heritage. Likewise, in the lovely number The Wedding Ceremony, the original production reportedly had the background chorus of bargirls singing nonsense syllables rather than authentic Vietnamese lyrics; that too has been fixed.

No Fair Blaming the Victim

That leaves a host of other objections that boil down to sexism and racism. (Spoiler alert: If you aren’t familiar with the show, feel free to skip down to the last paragraph but one.) Tim Teeman, for instance, wrote in The Daily Beast, concerning the 2017 Broadway revival, of “the relentless victimhood of Kim,” and about her “lack of agency,” as witnessed by the “total persecution and exploitation visited upon her and abject circumstances, culminating in her suicide.” Before reading these remarks, I had already concluded that Kim’s suicide was the ultimate act of agency, preceded as it was by Kim’s remark that other characters thought they were in control of events, but that actually she was, and preceded multiple times before that by a resolution to die if need be for her child Tam. Of course it is not a happy ending, but it is a successful one from the point of view of Kim’s agenda for Tam, and in any event, happiness and agency are separate questions. (Suicides on stage, I would argue, are usually acts of agency, including, just from the Shakespearean canon, those of Brutus, Cleopatra, Othello, Romeo, and Juliet.) And before we leave the subject of agency, what about Kim’s act in shooting and killing a character who threatens her child? It may be reactive, but to deny it the label of agency would be absurd. So I must respectfully differ with Teeman on this. Also with Pun Bandhu, an Asian activist actor quoted in the New York Times as calling Kim “very weak.”
By the same token, “victimhood” is one of those terms that is frequently used in a way which confuses subject and object. It is no fair employing it to criticize a person or character who has been made the object of distressing circumstances she did not cause and could not avoid, which seems to describe most of the bad things that happen to Kim. No one seems to be denying that Saigon and Bangkok (where much of the play is also set), were full of showgirls and prostitutes working at bars in the 1970s; no one is denying that poverty and an absence of options explained why they became sex workers; no one is denying that many Vietnamese women were orphaned during the war like Kim; all these things really happened. Is it a critique of a character as a “victim” to show these things occurring or to focus on the character to whom these things occurred? Beware, I would say, of blaming the victim for “victimhood.”

There has also been a palpable revulsion expressed by various persons of color, particularly those of Asian heritage, at – well, at what, exactly? I have now read through five separate critiques of this nature, none of them descending from very high and abstract levels of generality. I think what they mean to convey is that white theater-creators playing to a largely white audience and dealing somewhat inaccurately (for instance the nonsense lyrics) with largely Asian subject-matter and in the process foregrounding white characters – and in the same process not telling many other Asian stories – makes these commentators uncomfortable and/or offends them. These comments are sometimes coupled with complaints about “appropriation.”

If “appropriation” were used to mean that only Asians have the right to make theater about Asians, I think we would all agree that that smacks of unhealthy censorship. But I doubt that many of the critics who use this term about this production mean precisely that. Their issue, I think, is more about perceived inaccuracy of what is said about Asians, and about inadequate Asian representation in the theater-making process generally, and in the creation of this work specifically. As to the first issue, though, the former nonsense lyrics aside, I have yet to hear specific complaints identifying what is inaccurately depicted. As to the second, we can all applaud efforts to assure under-represented groups, including Asians, a greater percentage of stage time. But that does not require leaving demand for Miss Saigon unsatisfied.

Some of these comments complain about “fetishizing” Asians and particularly Asian women. This is another term with somewhat indefinite meanings. However, to the extent “fetishizing” means prominently featuring scantily-dressed Asian bargirls gyrating to the music in bars or sparkly Asian chorus girls in the Engineer’s big song, The American Dream, a Vegas-y production number, I can only say, that, equipped with a conventional straight male gaze, I did not find such tawdry spectacles a turn-on, and I don’t believe I was meant to. There is a dramatic distance from the depicted encouragement of lust which differs from similar spectacles in, for instance, Cabaret. We are not meant to buy into it at any level.

I’ve also detected a sadness about seeing Asians depicted as bad people. Mr. Bandu again commented: “none of the Asian characters are portrayed in a positive light – yes, they are victims of a war, but they are also characterized as opportunists, villainous …” This seems to be partly a case of arguing with the history the play dramatizes, and partly a case of ignoring Kim’s heroics.

My own critiques would go to more mundane matters, for instance the weakness in some of the lyrics. Take the otherwise moving song Bui Doi, about the illegitimate children of American soldiers left behind, which wears out its welcome by the fourth iteration of the bathetic description of them as “conceived in hell, and born in strife.” Or the thrice-repeated characterization of them as “living reminders of the good we failed to do.” Come on, exactly what unachieved good are they reminding us of? Winning the war (the principal good the American effort unsuccessfully pursued)? I don’t think anyone has ever needed to be reminded of that. Marrying the moms? If that were what’s meant, it would require a lot more explanation than an offhand phrase can provide, because the couplings of soldiers and prostitutes in wartime are not ordinarily the stuff from which actual marriages could grow. All that is really meant here, I think, is that we now have a moral responsibility to protect the children. And for that, the phraseology is inapt; the children are not “reminders” of that responsibility; they are its objects.

I could mention a few other minor criticisms (muddy sound, for instance), or a strange change (also noted by other critics) between Act One and Act Two in the characterization of Chris’ comrade-in-arms John (J. Daughtry). But I think at some early point we would begin missing the forest for the trees.

The “forest” is that this is an excellent contribution to the canon of operatic musicals, richly melodramatic, beautifully acted and sung, with outstanding production values (yes, there is a helicopter!), and intelligent about the effects of war, and – notwithstanding many of the comments I’ve mentioned above – intelligent too about the particular clash of cultures that the war in Vietnam effectuated.