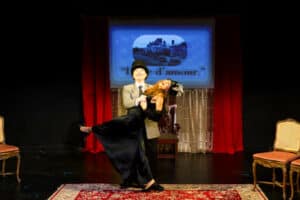 A Woman of No Importance (1893) is surely the least-often produced of Oscar Wilde‘s four comedies, and for good reason. In it, Wilde stages a conflict between a tolerance, if not admiration, of flippant and witty libertinage among a gentry ostensibly committed to strict sexual morality, and on the other hand a Puritanism (the characters’ own label for it) which takes that strict morality seriously. But Wilde commits the dramatically unforgivable sin of siding with the Puritans. In so doing he ignores the evidence not only of his own sexually-liberated life but of what he puts on the stage in this very play, forgetting that, as Billy Joel put it, “the sinners are much more fun.” It’s one thing in this kind of comedy to give the nominal villain a bit of a come-uppance, but another entirely to show him repudiated with heavy-breathing moral condemnation, and to revel in the way the virtuous characters break away not only from the supposed villain but apparently from his entire social circle. Northrop Frye long ago posited that at the conclusion of a comedy, society is knit back together, and as many characters at possible, including some or all who had earlier misbehaved, participate in the wedding dance. Perhaps Wilde’s Victorian audience truly rejoiced at a denouement which contradicted these principles, but it is hard to ask a modern audience to react in this way.

Rather, what a modern audience sees is the triumph of an unhealthy fetishization of premarital chastity, reinforced by uncharitable shunning and accompanied by gratuitous and injurious self-sacrifice. This becomes apparent in the revival currently being given the play by Washington’s Scena Theatre in a black box theater at The Atlas (convenient to Baltimore audiences, not far from the southern end of the BW Parkway). The production boasts of many innovations, some of which will be mentioned below, but in the matter of the grating denouement it follows Wilde with iron-jawed determination and adds no grace notes to soften it in any way. Lord Illingworth (Nanna Ingvarsson) is the chief libertine of the piece; twenty years before the action of the play, before he became a rich and influential man, he had seduced and then refused to marry the woman now known as Mrs. Arbuthnot (Sara Barker), leaving her with a son Gerald (Jen Bevarelli). In consequence, she had abandoned him to raise their son under an assumed family name to hide the “shame.” In the intervening years, Illingworth, in speaking style at least a true Wilde protagonist, has become a spouter of aphorisms that invert conventional views, a cynic, and a pillar of society. Nor has he lost his womanizing ways, being willing to dive into the shrubbery with society hussy Mrs. Allonby (Dina Soltan) (as shown above) and to accept her challenge to him to flirt with a virginal young American visitor Hester Worsley (Moriah Whiteman). It can also be argued that he goes to extraordinary lengths to attempt to make sincere amends to all whom he has offended, but he gains no traction with any effort to do so, and ends the play quite repudiated.

Apart from these design flaws, A Woman of No Importance is a typical Wilde comedy. What other playwright, for instance, would have a character utter a line like “The English country gentleman galloping after a fox-the unspeakable in full pursuit of the uneatable”? What other playwright would give his characters such ebullient flippancy at the expense of conventional morality – even if later on Wilde turns inexplicably heavy-handed and hard-breathing in defense of that selfsame morality?

One might expect that, in approaching a play like this, one with enough rough edges of its own, Scena and its director Robert McNamara, having decided not to blink at presenting these rough edges, would then leave well enough alone, and deliver the show with consistent straightforwardness, so as to maximize the Wilde-ness of the show. But that was not the choice that was made here. There were at least three decisions to jazz it up and stage it in a way that Wilde would not have anticipated.

First, as parentheticals above suggest, this production features an all-female cast. There was no reason stated for this course, either in the program or in any publicity material I have seen, and in this instance the reason is not easy to discern. One might, for instance, expect such casting in a production that was interrogating an existing classic from a feminist perspective; here, apart from its exaltation of Victorian Puritanism, which in my book was anti-feminist, the play is arguably quite feminist in its rejection of any effort to dismiss a woman as “of no importance.” One might equally expect all-female casting in an attempt to subject a classic to a queer critique or just a queering, such as an all-female As You Like It presented by Baltimore’s Center Stage a few years back. But I see no evidence of that in this production. Indeed, one of the reasons to like this show is that Ingvarsson gives us such a very conventionally male Illingworth. Not that we are ever induced to forget that it is a female actor performing the role; this is no male impersonator. But the whole persona Ingvarsson conveys somehow swaggers and blusters past the evidence of our senses, and we simply could not care less about the incongruity. I don’t think I’ve ever seen the play before, so I have no standard of comparison, but from my perspective Ingvarsson sets a very high bar any future Illingworth will need to surmount to satisfy me. The other five male roles seemed more gender-disparate, but it made no difficulties.

The second odd choice was resituating the action in Golden Era Hollywood. Again, the reasons why were not readily apparent. We regularly set Shakespeare in what Wilde’s fellow-Victorian W.S. Gilbert dubbed “all centuries but this and every country but his own.” However there are many reasons why, foremost among them, perhaps, that most of Shakespeare’s settings are fantastic constructs anyway, Cloud Cuckoolands of Shakespeare’s own imagination. Shakespeare isn’t going for authenticity, so why should we? But Wilde? In a play in which he critiques contemporary politicians by name and compares the two houses of Parliament? A play which turns on moral scruples and social customs like country house parties which had only limited analogies in the world to which Scena has transported them? What benefit derives from that? Actually, I can partially answer that last rhetorical question: there is the benefit of outstanding period costumes, courtesy of Alisa Mandel. I especially liked Dina Soltan’s glittery black number complete with befeathered hat (pictured above), and if you need an excuse like a change of era and location to evoke that kind of creativity, well, maybe there’s something to be said for excuses. But a lot of my pleasure dissipated among rewritings of the script to include terms like screenwriter, Academy, Directors Guild, and screening room. Moreover, given that there was plenty of identification of the characters and the locale as British, one found oneself wondering whether this was an effort to pass off Hollywood as some kind of suburb of London. Oh, well.

The third choice was to have many of the speeches delivered in a way that surely went against the grain of the way original director H. Beerbohm Tree or most subsequent interpreters have done it. I call this form of delivery “voguing,” after the dance style: striking a fairly angular pose and declaiming one’s lines directly to the audience rather than to the other characters to whom the lines are theoretically addressed. The show emphasized this in the opening, exposition-heavy going by rotating three or four society ladies in a sort of video-game way with appropriate sound-effects for rotating avatars, so that whatever lady had the dialogue was always in front. Perhaps it was felt that the exposition would otherwise be too tedious, the way directors regularly play games with the exposition at the beginning of Henry V, which really is tedious and hard to follow. But Wilde’s dialogue can stand on its own feet (read it if you doubt me). Worse, Wilde’s dialogue is, to a large degree, verbal voguing on its own: taking outrageous, angular verbal stances, like the above-quoted line about a foxhunt. Most directors would – and I would argue this is the correct way to handle it – leave the poses to the lines, and even deliver them in as conventionally conversational a tone as possible. That actually makes them more shocking.

One might think that with all these oddities (one-sex casting, gratuitous setting change, over-the-top declamation of lines that traditionally ought to be banked down for full impact) the overall effect would be catastrophic. But that isn’t the case. As long as one understands that this is an idiosyncratic production, and does not come expecting classic Wilde but rather something new and strange built on the platform of a Wilde play, the evening is actually a lot of fun.

One also has to take it in the context of Scena’s overall thrust. While a Baltimore critic does not come down to Washington all that much, this is at least the fourth Scena show I’ve seen, and all have been impressive in one way or another, including Wilde’s own tragedy Salome and a stark, Trump-era Julius Caesar. Scena does classics and contemporary drama in ways that appeal to the head as well as the gut. And I suspect that the choice to do more of a Wilde fantasia than a Wilde play was as carefully deliberated as any other. Perhaps, because the play is so defective in its conception, the impulse was just to mess with it and see what happens. Even Homer nods – and when Wilde does (as he certainly did here), maybe all bets should be off.

If you go expecting, as it were, wild Wilde, you won’t be disappointed.