Mocking a Personality Cult: PUTIN ON ICE at Single Carrot

Mocking a Personality Cult: PUTIN ON ICE at Single Carrot 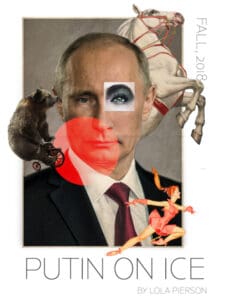 In a short 2016 profile in American Theatre, Russian emigré director Yury Urnov expounded on the freedoms of theater: “You can hate people; you can do a hate show about Putin, for example, or about your ex-wife.” It seems that Lola B. Pierson’s Putin On Ice (That Isn’t the Real Title of This Show) is the hate show about Putin that Urnov, a close associate of Pierson through Baltimore’s Acme Corporation, had in mind. (That said, Genevieve de Mahy, the Artistic Director of Single Carrot Theatre, on whose premises that show, a joint production with the Acme Corporation, is now playing, claims in a program note that the idea came from Single Carrot.) In the same profile just mentioned, Urnov emphasized how important and liberating it was to laugh at the things that distress us. Putin On Ice is nothing if not funny, though, as my companion on press night pointed out, there was a risk, throughout most of the show, that the laughs would ultimately obscure the seriousness and the threat of its subject.

The laughs come in many different ways, but the common theme is that Putin’s now-notorious cult of personality assumes absurd proportions. Spectators will learn, among other things, that Putin influenced contemporary busts of Caesar, that he was a character in Shakespeare’s and Chekhov’s plays, participated in a famous historical assassination, and is the real subject of certain well-known classical paintings. They will participate in moments of interactive meditation on the sayings of Putin which, to the uninitiated, might seem a lot like jokes. They will witness a Putin game show and participate in a Putin survey that puts a familiar piece of office equipment to an unexpected use. The point being, it appears, that Putin’s ubiquity in his country makes not thinking of him, umm, unthinkable, no matter how detestable he is.

That ubiquity renders it unnecessary that any specific performer (out of a cast of ten) actually portray Putin, though all but one of them are identified with Barbie Doll-like variations on his name – hence Baby Putin and Religious Putin and Drag Putin, for example. What these characters really are, however, is the Single Carrot ensemble with members of the Acme Corporation, dressed in a sort of Village People-ish profusion of outfits, all unique, all a little outrageous, and none of them resembling Putin in the least. Putin, like the Deity, is nowhere and everywhere, while the ensemble members are just everywhere, and doing all sorts of things: riding a tricyle, playing instruments, using doll figures to recreate historical events, tapdancing on tabletops.

Comparisons to Putin’s good buddy Donald are inevitable, and there is an audience exercise before we are even allowed into the auditorium that brings to mind Donald’s aspersions upon the veracity of the press – although, to be fair to Donald, Russian reporters who tell unwelcome truths about Putin’s government are far more likely to turn up dead than their U.S. counterparts engaged in similar tasks (so far). But still, there is an unpleasant and no doubt intentional frisson of familiarity.

Attendees at this theater piece are continuously reassured that they are free to leave at any time, but this is of course a mockery: as noted above, what is ubiquitous cannot be left behind. Trump Derangement Syndrome is probably child’s play by comparison.

That brings me back to the comment from my companion: given the oppressiveness of the subject, the relatively light-hearted treatment it receives is arguably inapposite. The job of more directly adverting to the seriousness beneath the fun is apparently delegated to Urnov’s wife, actress Tania Karpekina. I say “apparently” because she addresses the audience at the beginning and the end of the piece, almost exclusively in Russian. Most of us, this reviewer included, were able to understand only those few parts of her message conveyed by tone of voice, body language and the audio-visual accompaniments. I did recognize among the projections during her speeches a photograph of Russian anti-corruption crusader Sergei Magnitsky, whose at best criminally negligent death in custody was the subject of One Hour Eighteen at Theatre Project a few years ago and made him the namesake of a U.S. law sanctioning Russia and other countries for human rights abuses. Also photographs of some members of Pussy Riot, whose protest art netted them time in Russian prisons. I can empathize with the choice to employ the Russian tongue at the moments of greatest seriousness. Still, it would have been better, I think, to have delivered this material, probably the heart of the message, in the audience’s own language. We needed not merely to hear but to understand.

That miscue aside, the show is thoroughly entertaining in small ways as well as large. The familiar try-anything Single Carrot high spirits are on display, whether manifested in the employment of Beatles songs sung in Gregorian chant or in a reference to Ritz crackers in a manner doubtless unique in the annals of the theater. There is a subliminal eeriness in a set consisting mostly of a gold-trimmed red runner under a lengthy table in the center of the performance space that makes one think of Communist presidiums of old, while the walls are hung with banners that do not contain swastikas but clearly were meant to remind us of banners in history that did. And then there is the tonic release we receive from the parody of the Putin cult. As Thomas More put it, the devil cannot endure to be mocked. And this show proves More right: there is something empowering in being able to laugh at one of the worst men in the world. When we are empowered, Putin is to that extent disempowered, something he doubtless cannot endure with equanimity.

There were news reports this summer that Single Carrot was experiencing existence-threatening financial problems when a tenant company moved out of its space. It appears that SCT has gratifyingly survived the crisis. Baltimore would be much the poorer without it. This has also been my first contact with the Acme Corporation, a collective of which we should all hope to see more.

Come, then, prepared to laugh and shudder.

Copyright (c) Jack L. B. Gohn, except for promotional artwork.