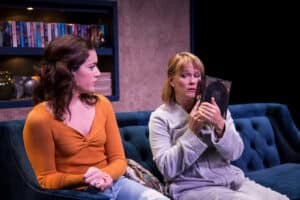 “I’m sensing that you’re not being entirely honest here,” says one character to the other in Callie Kimball’s Things That Are Round. That’s putting it mildly. The two characters in this play, receiving a world premiere performance by Columbia’s REP Stage (after a lengthy development process elsewhere), are constantly lying to each other and to themselves, and thus, indirectly, to the audience. Dubious statements prevent the audience being able to make up its mind about many important things happening throughout the play, either onstage or off, except perhaps in the play’s final moments.

We can be relatively certain of this much: Tetherly, a dentist (Beth Hylton), hires Nina (Thais Menendez) to babysit her four-year-old son Dylan, initiating an increasingly fraught relationship between the two women, based on what may be a series of delusions. How real is Dylan, for instance? Is Tetherly the world’s least entrepreneurial dentist? Is Tetherly really pursuing a doctorate? Does Nina actually have a claimed child of her own, or a husband, or a lover? Does Nina sincerely believe (contrary to what the audience has heard when she delivers a song) she has a ghost of a chance to become an opera singer? While these and similar basic questions about what the characters are doing or why are never fully resolved (nor do they need to be), the debatable and sometimes contradictory answers each character gives to these questions form the basis of a relationship that dramatically and comically changes as the play progresses.

It becomes apparent that at the outset the appropriately-named Tetherly is trapped, revolving around a set of pursuits and obsessions that bring her less and less comfort or happiness. Nina, younger, without clear loyalties or commitments except to being paid, represents freedom to Tetherly, who would like to find a way of getting closer to this intriguing domestic servant without relinquishing the authority of a boss. Given Nina’s restive nature and her penchant for schemes and ripoffs, Tetherly’s desires may prove impossible ever to reconcile. And they probably would be, were Tetherly left to her own devices. But Nina locates a way to break through the stalemate, making it possible, at the end, to classify this often very funny play as a comedy, and something between a love story and a buddy story.

REP Stage is giving it a very impressive maiden voyage. Beth Hylton, well-known to Baltimore audiences, delivers nicely her character’s sometimes hysterical loser-dom without evoking either too much or too little sympathy. And Thais Menendez is great at “talking arrows,” as the stage notes put it – when she does not just withhold, clam up, and allow Tetherly to twist in the wind. The difference in the textures of these performances is exactly what’s needed to make believable the symbiotic needs that draw the characters together despite themselves. Lola B. Pierson’s sensitive direction seems to capture the playwright’s vision precisely, leaving obscure only that which Kimball wanted to have left obscure. (Pierson also wrote Putin on Ice, just recently featured at Single Carrot; her comfort with that show’s high-spirited try-anything comedy makes her affinity with this work seem natural.) I loved Sarah O’Halloran’s composition and sound design featuring classical and classical-sounding music that had been altered to suggest the distorted and/or agitated thinking in the characters’ minds, and Jenny Male’s fight direction which yielded a confrontation at once funny and worrisomely dangerous-looking.

At this exciting moment in American playwriting, the role regional theater has taken on in developing and premiering new work has been a great thing. We need more of it in this region, and REP Stage’s commitment to the process (as in Susan McCully’s All She Must Possess last season) is to be commended. For audiences, stepping away from the tried and true, even into works as disorienting as this sometimes is, can be among the most invigorating theatrical experiences.