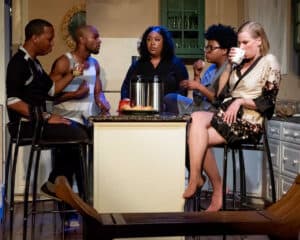 It’s easy to see why Lydia R. Diamond‘s Stick Fly has left critics of two minds. Writing of the 2011 Broadway production (an earlier version of the show premiered in Chicago in 2006), the Wall Street Journal’s Terry Teachout called it “a mess, but a fascinating one.” Charles Isherwood of the New York Times described it as “overstuffed but lively.” And lots of critics have groaned a bit over the melodrama in the play. The critics’ reservations have their roots in various places: the multitude of issues Diamond takes on, the improbably high number of secrets the characters carry, the “well-made play” principles that Diamond has admitted pursuing conflicting with the play not seeming to go anywhere, as Roma Torre of NY1 pointed out. Yet almost every review (save for Hilton Als‘ excoriating takedown in The New Yorker) has admitted to finding the show fascinating.

Add this writer to the “of two minds” faction. My first exposure to the show has been the current Fells Point Corner Theatre revival, directed by Christen Cromwell, and there were moments I felt I was drinking from a firehose, trying to keep up with Diamond’s complicated and at times obscure interplay of racial discourse, class politics, and family melodrama. It is difficult to describe it further without dropping spoilers, but the setup at least can be broached. The play, which takes place in the living room and kitchen, and also on a porch, of the Martha’s Vineyard home of African American neurosurgeon Dr. LeVay (Louis B. Murray), chronicles a weekend when the doctor’s two sons, aspiring novelist Spoon (Jared Michael Swain) and older brother and plastic surgeon Flip (JC Payne), bring home their girlfriends to introduce them to the family. These newcomers are a black entomologist named Taylor (Adrienne Knight), from a less-privileged background than the LeVays’, and white inner city educator Kimber (Barbara Madison Hauck). Helping out is Cheryl (Shelby Sullivan), daughter of the LeVays’ usual domestic servant, filling in for her ill mom. Clearly, in addition to the racial divide between Kimber and the rest, there are multiple social class gradations at play – not to mention certain secrets concerning initially undisclosed relationships among those present (and absent). We see lots of exposition of all this material, and then lots of fireworks as the material proves combustible. So there is lots, perhaps too much, for the audience to keep track of, but also lots to enjoy.

It’s arguable – and I think this was the essence of critic Torre’s point that I mentioned above – that at the end of the play, for all the fireworks, the characters’ lives haven’t changed much, except for the spillage of secrets. That kind of change is not really a requirement, however. Who’s Afraid of Virginia Woolf works fine with an end-situation a lot like the one prevailing at the beginning, and succeeds by virtue of exactly the same kind of middle: a party at which secrets emerge amid sometimes comic verbal bloodshed. This is not to say that Diamond is the same kind of playwright as Albee, but they each make use of the same dynamic. This director and cast do quite a tolerable job of mining this middle-material paydirt. I particularly appreciated Louis B. Murray’s paterfamilias, blustering and patronizing up to the moment an unanswerable revelation silences him; we’ve all known guys like this. And Adrienne Knight as the entomologist/prospective daughter-in-law can go on a lengthy rant for me any time she likes. The characterization that gave me the most to think about was Shelby Sullivan’s version of Cheryl, the temporary help, whose equal opportunity sullenness was perhaps the most challenging portrayal. At any given moment, is she upset about race, class or family issues? Hard to tell; and the trick is probably in keeping it obscure, not making the character too easy to parse or relate to.

Audiences should approach this play, then, and this production, with the expectation that they will not understand all of it, fully grasp any character’s motives or thoughts and/or the playwright’s position on many of the issues she aerates – and that that’s okay. The fun is in just watching it happen.