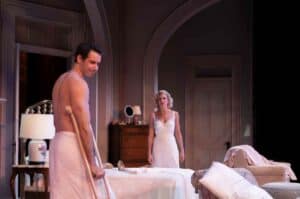 Tennessee Williams‘ Cat on a Hot Tin Roof, an indisputable classic, did not attain that distinction on the basis of its clarity. It is notoriously one of the most ambiguous, most internally inconsistent works in the American dramatic canon, impossible to perform while simultaneously giving full faith and credit to every point established in the script and every interaction we witness among the characters. The ultimate question Williams poses is: Will Maggie, the indomitable wife of Brick, the drunkard scion of a Delta plantation manse, overcome the estrangement between her and her husband long enough to conceive a child and thereby preserve Brick’s claim to the family estate? And Williams leaves that even question far from definitively resolved.

Director Judith Ivey‘s version of Cat, now enjoyably ensconced at Center Stage, is described in a program note as being a “traditional interpretation” and a “love story,” which among other things must mean that the answer we are supposed to take away to the question whether Brick and Maggie will get together again is yes. Because Williams has so successfully gotten us cheering for Maggie, we in the audience want this. We would very much like to see Maggie triumphantly dragging Brick into coitus and conception in the final frame, and an interpretation like Ivey’s, which all but promises that, is bound to be a crowd-pleaser. But if a director chooses to make that easy initial choice, that will be about the last easy thing the director will find in this play.

To present this take on the piece, Brick (Andrew Pastides), must be thought to continue to love Maggie (Stephanie Gibson) in some way, shape or form, in the presence of repeated evidence she has repelled him since the moment he learned she slept with his friend Skipper, causing various unhappy consequences. And the audience must be made to disbelieve the interpretation that Brick’s own relationship with Skipper was an at least unconsciously sexual one.

As to the first challenge, Ivey lays the groundwork for showing the two of them in love as early as Act One, but it isn’t easy, as the Act ends with Brick’s question which sums up the problem: [H]ow in hell on earth do you imagine – that you’re going to have a child by a man that can’t stand you?” That’s strong language if they are supposed to be mutually in love at that point. Ivey, it seems, hopes to counteract the early evidence of Brick’s revulsion at Maggie by showing Brick and Maggie sharing a number of laughs at her catty observations about Brick’s family. But these mutual laughs are not commanded by the script. And it doesn’t work well; there is something uncomfortably sitcom-y in the way this Maggie laughs at her own jokes. Fortunately, the staging of Acts Two and Three (though there is only one intermission in this rendition) doesn’t continue to make her behave out-of-character this way. But there’s nothing much to work with on the other side. Until the very last moments, the script provides little other raw material for the argument that their relationship is improving. The best support – and it’s weak – is the material relating to homosexuality.

On that score, Ivey is struggling at least as much against what we know about Williams as against the script. It is common knowledge that Williams was a gay playwright itching to out himself (as he actually did on David Frost‘s show years later). That was not something he could do in 1954, when he wrote Cat. Brick certainly acts like a man with a secret he wants to act on but not to name – and that secret does not seem to be heterosexual desire for Maggie. True, we have Maggie’s lip-smacking account of making love with Brick in earlier days to contradict the accusation, but only her words. What we see, on the other hand, is that Maggie cannot now get a rise (literally) out of Brick.

There is a similar contradiction in the relationship between Brick’s father, Big Daddy (David Schramm), and his mother, Big Mama (Charlotte Booker). Big Daddy is one of the great characters of American theater, a demiurgic creator of a 28,000-acre plantation, profane, domineering, direct – but helpless against the cancer that will soon take his life. He claims to despise his wife, and maybe he does, but he seems more dependent upon her than he lets on. She is no slouch herself in the domineering department, and when she simply refuses to take him at his word as he rejects her, we have to consider seriously that her husband talks a better game of despising her than he plays. Maybe this too is a love story

Granted, there is some support for Ivey’s love story approach in the play’s last 200 or so words, but they are far from conclusive, and there is less support in the stage directions, which are crafted to foster ambiguity. This cast does not precisely follow them – although it hews closer to them than did a recent Broadway production I saw starring Scarlett Johansson which helped along the love-story reading by closing with Maggie actually climbing astride Brick in bed with sexual intent.

But as I say, we in the audience want to believe that Maggie and Brick have a future. She is honest (mostly) and poor and scrappy and, her flawed behavior with Skipper notwithstanding, she is admirable. And Brick is – well, at least he is honest. (With an asterisk about his failure to acknowledge even to himself his sexual orientation, if we read him that way.) So Ivey gives us the Maggie and Brick we want to believe in. And why not? As I’ve said, every other approach to the play is also fraught with land mines. This approach is at least as valid as the others.

And having chosen it and done about as well as one can do with it or any of the possible approaches, Ivey has helmed a really admirable production. Stephanie Gibson is everything one could want in a Maggie, determined and scrappy and smart and sexy. Andrew Pastides does what may be hardest for a Brick, holding fast to a comparatively flat affect, flat enough to render his thoughts and motivations mysterious, while everyone around him is acting up a storm. And – well, I’ve seen my share of Big Daddys, and I think Schramm is the best I’ve encountered. As I’ve said, it’s a monumental role. Schramm plays him with an enormous gut and an unrestrained id and he conveys the crudeness and impatience of a man who could assemble the largest farm in the Delta; he dominates every scene the way a Big Daddy should. (It’s very interesting comparing his performance to that of Burl Ives, who originated the role – albeit my only basis for comparison is the wretched 1958 movie. Ives, by contrast, comes across as tentative, vulnerable, and hardly believable as an empire-builder.)

The set, by Adam Koch, is handsome; one looks for little originality in the set of this play, constrained as it is by Williams’ fairly extensive prescriptions, but the execution matters greatly in a play where the world outside the room constantly encroaches, and the set must convey the vulnerability of Maggie and Brick’s privacy. And I was quite taken with Victoria Deorio’s sound design, from the clarity of each speech to the subtlety of the music cues.

Finally, as one whose own stage debut was as a juvenile in a Williams play, I tip my hat to the three youngsters who periodically erupt onto the scene as the “no-neck monsters,” a fine articulate little bunch of hellions: Leonardo Manni, Jack St. Pierre and Nina Brothers. (Though I wonder why a company with the resources of Center Stage cut Williams’ number of onstage monsters by one – and likewise the number of servants by one.)

Center Stage’s fans are eagerly awaiting the arrival of Stephanie Ybarra, the new Artistic Director, to see what unique stamp she places on the programming at this critical Maryland institution. In the meantime, this handsome production of an American classic serves as a welcome placeholder.