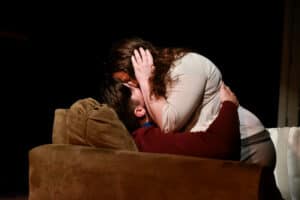 “What the heck was that?” is apt to be the question on many theatergoers’ minds as they file out of Sex With Strangers, Laura Eason‘s two-character drama now at Fells Point Corner Theatre. Is the play a comedy? A romance? A melodrama? A play of ideas? A jeremiad against digital modernity and/or celebrity culture and/or bro culture? Eason’s script, a melange of all of these things, does not make it easy to decide which one predominates. It’s not even easy to say what is really happening. Is there a love story going on, or is this just the spectacle of two canny operators each trying to exploit each other? Do they know themselves?

This much seems clear: Ethan (Matthew Lindsay Payne), who has parlayed his success with a blog about his sexual conquests called Sex With Strangers into two New York Times Bestsellers but who is now seeking to become an author of literary fiction, stumbles into a rural Michigan B&B in the middle of a snowstorm and encounters Olivia (Kathryne Daniels), a published but so-far unsuccessful novelist and fellow-guest, whose sole novel Ethan just happens to know and admire. Sparks fly, and sex ensues, and then creative sparks fly too. Ethan introduces Olivia into the worlds of Internet and print-media celebrity. As the play progresses, and we get into the second act, Olivia, under Ethan’s aegis (and trickery) becomes somewhat adept at winning on Ethan’s playing field, but their personal relationship, however one characterizes it, hits troubled waters, in part because Ethan’s persona is irreducibly built on the shallow exploitation of women. He insists that there is a cleavage between that persona and himself, and that the women he had formerly involved himself with were in any case no victims, but eager participants in the quest for new-media stardom of their own. Olivia, who does not necessarily buy into the cleavage notion, seems unpersuaded.

Olivia, meanwhile, is wrestling with a problem endemic to writers of serious fiction: such writing tends to be autobiographical, and to do it well typically entails large amounts of self-revelation. How is a writer of the stuff supposed to maintain her privacy? And what are we to make of it when Ethan repeatedly overrides her privacy demands, ostensibly for her own good and with demonstrable good results? It leads to problems of authenticity for her that are almost as large as his.

In the end, because the mask each character wears contradicts what each claims is his/her true personality, and because the moral significance of what they do depends to a great degree on who is acting and who is acted upon, we cannot finally state with certainty whether there is any “there there,” in Gertrude Stein‘s phrase. The very last thing that happens in the play betokens ambiguity.

With such a play, directorial choices will loom large. It would appear that the play has been produced rather differently at different places and times, from its first developmental performances at Chicago’s Steppenwolf in 2009 and 2011 to Off-Broadway in 2014 and then onto regional and community theater. (Regionally, it has been put on by Alexandria’s Signature Theatre and Annapolis’ Colonial Players.) Along the way, however, most directors have cast Olivias who conformed to Eason’s description, “smart, sexy, outwardly strong but covering some fragility,” and Ethans who were, in Eason’s phrase “very charismatic [and] sexy.” For instance, Off-Broadway Olivia was played by the tall, willowy, and forceful Anna Gunn and Ethan by Billy Magnussen, fresh from playing the boy-toy Spike in Vanya and Sonia and Masha and Spike. The current director, Patrick Gorirossi, has gone in another direction, with an Olivia who is mostly about covering the fragility, wearing baggy sweatpants for much of the action, and acting ungainly in a slapsticky way, and an Ethan who is stronger in the comic timing than in the charisma department. Sometimes this matters. For instance, in puncturing Ethan’s self-justification at one point, Olivia mocks him: “You’re kind-of a modern day Mother Teresa! But instead of helping poor strangers, you bone them!” To this Ethan replies: “I do what I can.” That line will sound differently coming from someone with charisma who knows it than from a jokester.

This exchange also leads me to mention that the credits in the program list a specialty I have not encountered before, an Intimacy Choreographer (Emily Sucher). This designation seems like a great idea, especially in this era when performers are speaking out about harassment of all sorts, including liberties taken onstage that are arguably in character but which make the recipients uncomfortable. Here, in keeping with the jokiness I have noted in the overall direction, the sex usually seems to be deliberately fumbling, awkward and somewhat self-conscious. Video I have seen from other performances makes clear it is not always that way, and it is not called for in the script, which simply says, for instance, of the first bedding: “ETHAN kisses her. Passionately. She kisses him back. Passionately. Clothes begin to come off. Sex is imminent.”

In the end, then, the answer this production seems to provide to the question “Who are these characters really?” is that they are not the glamorous folk they pretend to be for public consumption. The problem this raises is that by the end, this couple kind of arethat way. And again, costume changes consistent with this reading and not called for in the script tell the story. The final appearance of each of them looks more put-together – and also more like their allegedly deceptive personas. It’s all very confusing, as I stated at the outset.

While I obviously would have preferred making them both more glamorous throughout, I thought the approach that was used with Olivia was not without its benefits. Kathryne Daniels gives Olivia a way of visibly thinking things through and of making intellectual and emotional connections that is convincing, and very appealing to watch. A more sophisticated Olivia would react differently. Ethan, I think, is a harder role to make real. He has built a career out of acting like an exploitative jerk, and the fact that he may have undiscovered fictional genius, even if one believes it (which I found hard to do), and possibly an inner monogamous boyfriend, still, in the here and now, jerk is as jerk does. His journey out of that predicament is not cleanly or clearly sketched. Matthew Lindsay Payne does what he can with this construct, but it’s very hard to pull off.

Because it is usually easiest to write about what one knows, writers do tend to write about writers a lot. There are times this phenomenon can give rise to a kind of inbred quality, and there is some of that in this play. For instance, I was wondering how many members of the audience got the reference to “FSG” in the publishing world. More importantly, the struggles of authors with the tendency to bare their souls and the equal but opposite tendency to maintain their privacy, no matter how fascinating to writers, are the kind of thing where a little bit goes a long way with the rest of us. Nonetheless, if the subject of writers is of interest to you, this play is a decent effort to come to grips with it. And the play will certainly keep challenging you the way a puzzle does. It begins, no doubt portentously, with a question that it never completely answers (Olivia to Ethan “Who are you?”) and it ends with deliberate lack of clarity over whether the characters have any future. In short, this is theater which keeps the audience on its toes, no matter what label you slap on it.