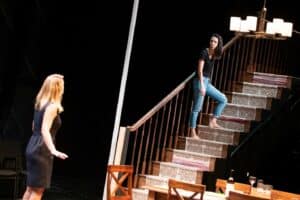 “After such knowledge, what forgiveness?” T.S. Eliot wrote, in a phrase that could be the epigraph for Amy E. Witting’s The House on the Hill, the premiere of which is presented at this year’s Contemporary American Theater Festival. After one’s sense of the world is altered and embittered by an experience that divides life into a before and an after, can the bitterness ever be surmounted, and if so, how? Those are the questions that power this forceful play.

Before and after what exactly? Audiences of modern drama are all too familiar with the overused device of the dark family secret that every character knows but which will not be spoken of directly until the play is well along. This play also relies on that device, but here it does not seem hackneyed. The characters, Alexandra and Frankie (Joey Parsonsand Jessica Savage) are shown tacitly agreeing to steer clear of the secret not merely because such circumspection is calculated to heighten audience interest; once we understand what it is, we can see that the characters know that if they address it, a long-buried grievance between them will have to be put on the table, and worse, they will need to rip off the emotional scabs that have formed over a terrible trauma.

The two women were cousins and contemporaries, and in their adolescent lives the best of friends. Through their remembered younger selves (Sam Morales as Alexandra’s younger self Alex and Ruby Rakos as Young Frankie), we can witness part of the heyday of their relationship. Then, because of the day that marked a continental divide in their lives, they were separated, and have not been in touch for seventeen years until now, when Frankie comes to Alexandra’s house to pay an unscheduled call. And it is far from clear that if the thing that has gone on diminishing their lives and has separated them for seventeen years is mentioned, they will be able to resume any kind of relationship.

But of course, people’s needs being what they are, and this being the theater to boot, they will have to bring it up. And when they do, all hell predictably breaks loose. The unresolved anger, the shock and terror, the longing for forgiveness and reconciliation all explode in a complicated, tearful burst of emotion.

The tears seem to be at the discretion of the director, Ed Herendeen, since there are no stage directions in the script specifically commanding them. And while it is hard to read the play without sensing that tears would be appropriate, the extent and the power of them in this production of the play are amazing. Let me hasten to add that there is nothing maudlin or clichéd happening here, no reconciliation, for instance, based upon some kind of merger of the characters’ weeping. There is no definite reconciliation at all, in fact, though there appears to be some degree of forgiveness, and a definite change in the burdens each character will bear going forward. Instead, we observe two highly damaged people trying to become more whole, in realistic and hence realistically limited ways.

Which is not to say that there is not some welcome artifice in the piece. The way the earlier versions of Alexandra and Frankie are deployed is cunning. When the adult version of one of them leaves the room (e.g., to get food or visit the bathroom), the younger enters, and the reenactment of key scenes from the earlier time occurs with one adult in her memory replaying those pivotal moments in tandem with the juvenile version of the other. We see, in effect, each woman’s memories of the other as a teenager.

And the high point of Alexandra’s long speech letting loose with all her pain and fury occurs, by what is surely no coincidence, with Alexandria standing in a dominant position halfway up a very long staircase (pictured above).

What the floor at the top of that staircase is like, and what it means, is also revealed in due course. All I shall say here is that the eponymous house is a character in its own right, and the offstage second floor is an interesting and somewhat poetic touch.

I cannot end without remarking on the sheer power of the two actors who play the leads. I have already commented in a review of another show about the range that Joey Parsons demonstrates between this role, which necessarily evokes a nearly volcanic release of emotion, and the very buttoned-down and circumspect character she is called upon to play in another show at the Festival. And Jessica Savage was astonishing; in one day I witnessed her, in a different play, enacting with graphic realism the fate of a gunshot victim, and then going through the emotional wringer of Frankie’s part in this one. These were marvelous histrionics, using the word not as a putdown but in its root sense: the actorly presentation of emotion.

So, to summarize: Insightful, powerful script, and great acting. Not to be missed.