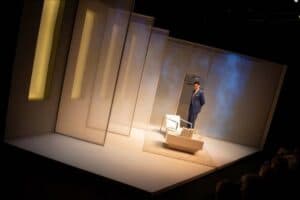 It is a reasonable guess that most theater-goers who remember Ronald Reagan or have educated themselves about him will think of him as one who did great harm. Under Reagan, the Republican Party accelerated a drift toward racism and reflexive hostility toward all uses of the government to foster the common good; the Iran-Contra deal took place, a marquee event in a program of sponsoring of right-wing militarism and attacks on indigenous populations in Central America; steps were taken toward breaking unions, marking a decisive turning of national policy against the middle class; public health policy took a backseat to homophobia as the AIDS epidemic was ignored for as long as possible; and trickle-down economics, a destructive voodoo that never has worked but has remained Republican orthodoxy, was embraced. A show about Reagan that does not explore how his personality gave rise to such destructiveness is not going to satisfy any well-informed theatergoer.

Yet such a show is unfortunately what playwright Michael Weller has given us in A Late Morning (in America) With Ronald Reagan, receiving its world premiere at this year’s Contemporary American Theater Festival. An interview with Weller published in the CATF website makes clear Weller himself understands the dramatic urgency of the question.

Weller nonetheless re-creates Reagan’s well-known bland agreeableness without doing much to reconcile it with the dissonant malignance of Reagan’s political program. Through his careers in radio, Hollywood, television, and politics, Reagan and his backers fashioned a persona for him, a kind of Teflon shield down which all criticisms were intended to slide. The question that persona often provoked then, and provokes to this day, was and is the extent to which there was any true personality under that Teflon front. Weller seizes on one of Reagan’s most famous movie lines (“Where’s the rest of me?”) to encapsulate it. And it would be the right question, were Weller to ask it more fully – were Weller to ask where was the part of Reagan that allowed him to live with the sheer meanness and regressiveness of his politics.

Nothing prevented Weller from doing so. The show is structured as an end-of-career interview with Reagan. Interviews are by their very nature confrontations in which the interviewee is put to some kind of test. But there is no test here. Whether the interview (with an unseen interlocutor) is actually taking place or is merely an incident of a perimortal fugue state or a figment of Reagan’s disintegrating imagination as he loses his mind to Alzheimer’s or a combination of them remains open and not very important. But to the extent there is in the world of the play an actual interview, it is telling that the interviewer comes from the “Wyoming Horse Breeder’s Monthly,” a fictive publication whose very name amounts to an assurance that Reagan will not be challenged much by its emissary. The non-political focus of a narrowly-focused trade publication would render journalistic curiosity about the bigger and more important questions, particularly those going to the core of a subject’s personality and politics, most unlikely. Weller could have confronted Reagan with a (real or imaginary) true political journalist. As a result of his failure to do so, there is almost no room left for the important questions to intrude.

About the only place the Reagan character is asked about his actual policies, it concerns the one area in which audiences may be inclined to give Reagan credit: standing firm against the Soviet Union and wringing out of that country as it drifted toward dissolution a nuclear disarmament treaty and the end of the Berlin Wall. Whether these really were accomplishments or merely inevitable events that happened on Reagan’s watch I leave to others to decide. My point here, however, is that this is almost the only point in the play where Reagan addresses policy and connects it directly with himself. In other words, the character gets a pass on everything tough, and talks substantively only about the creditable parts.

Reagan is even allowed to let slide the tough parts of his personal life. Here he is on his first wife: “Yes, I married Jane Wyman in 1940. She was a contract player at Warners. Two wonderful children resulted from that union; Maureen and Michael. Jane Wyman was an ambitious Hollywood actress who put career ahead of family. We divorced in 1948. What more is there to say?” Obviously, this is a lie, because there is always plenty to say about any union that resulted in two children.

So, yes, the production surely gives us an afternoon with Ronald Reagan, as charmingly unilluminating as that might be. And the audience enjoyed it; tellingly, though the biggest laughs came when Reagan was making disparaging jokes about the Berlin Wall, calculated to evoke the Trump would-be wall. But audience enjoyment should not mask the lost opportunity; in faithfully depicting a person who provided so few insights into his character, A Late Morning disables itself from providing any insights of its own. That there was no “there there” (as Gertrude Stein put it) is, one supposes, an insight in its own right, but only a small one.

This is not perhaps the most animatronic Reagan possible. This production was originally supposed to star Tim Matheson, who has played Reagan in 2016’s Killing Reagan, and who looks a lot like the mature man who served as president. For some unspecified reason, Matheson dropped out of the project, and the much younger-looking John Keabler was swapped in. This was in keeping with the directions in the script: “The actor can be any age, and needn’t resemble the ‘real’ Ronald Reagan.” I’m not sure why Weller would put such a self-defeating direction in the script, but there it is. Still, Keabler, with his lanky body, does manage to remind us of the way the historical Reagan moved. When I saw the show at the opening official performance, Keabler still seemed a little tentative in the role, rushing some of his line readings and apparently stumbling on certain lines. But one assumes those problems will go away.

I cannot end without mentioning Luciana Stecconi’s masterly set design depicted above: a series of filmy screens that strongly evoke the veiled (even from himself) nature of Reagan’s character, and also accommodate projections.

I hope Weller will continue to work with this script, and will go ahead and try piercing Reagan’s veil.