Great Recall During the Great Terror: MEMOIRS OF A FORGOTTEN MAN at Contemporary American Theater Festival

Great Recall During the Great Terror: MEMOIRS OF A FORGOTTEN MAN at Contemporary American Theater Festival 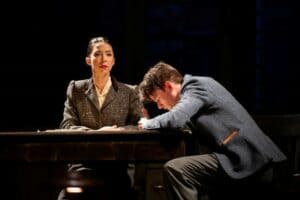 The reported genesis of D.W. Gregory’s Memoirs of a Forgotten Man, now at the Contemporary American Theater Festival on the first stop of a rolling world premiere, was serendipity. The playwright came upon a Russian neurologist’s report of a savant who possessed a limitless memory and was affected by a tendency toward one form of synesthesia, the perception of sounds in a visual way. Of additional note was that the case report concerned and was written during the era of Stalin’s murderous purges, when former leaders, now newly-minted enemies of the state, were not only killed but eliminated from the historical record. The savant, of course, would have remembered things and persons the State was trying to force people to forget. The play emerged from this notion.

In the play, the savant Alexei (David McElwee) is also afflicted with an inability to dissemble, a dangerous thing in a totalitarian state, where the power to lie is an important survival tool, especially if one is burdened by a recollection of the actions and words of erased enemies of the state. Alexei has sought help for his complex of problems with Natalya (Joey Parsons), a psychologist he enlists in pursuit of forgetfulness. (Parsons and McElwee are pictured together above.)

As it happens, Alexei is not the only character with inconvenient memories. A different sort of unwelcome obsessive memory afflicts Kreplev (Lee Sellars), a state functionary apparently in charge of politically vetting Natalya’s report on Alexei’s case before it may be published, meaning that Kreplev has the power to destroy Natalya’s career simply by denying approval.

Natalya ends up helping both of them and herself. It emerges that Kreplev’s painful memory is real although his relationship to the report has levels that are not immediately apparent. Kreplev’s memory, we learn, cannot be cured, though he may be educated as to come to terms with it. Alexei’s memory, on the other hand, may be an entirely different matter. In the world of the play, forgetfulness may be entirely possible.

As the two stories unfold, we meet Alexei’s brother (Lee Sellars again), his mother (Erika Rolfsrud), and a nosy neighbor, Madame Devidova (Joey Parsons again), whose intrusive curiosity may be as dangerous as memory in a totalitarian world where secrets are another survival skill. We also hear lyrical descriptions of synesthesia that have an almost poetic impact.

After seeing the show, I found myself engaged with numerous other attendees in a debate over whether this mix of memory issues cohered dramatically with the tale of state erasure of history. Few of us hewed consistently to any one position on this; it is difficult for some reason to say. If the two themes do synergize, then one would expect them to add up to some kind of whole greater than the sum of the parts. And obviously, the mere perception that erasures of nonpersons are terrible Orwellian things is not that greater sum, because it’s something everyone already perceives, not just intellectually but viscerally. But there may be something else; the themes feel as if they come together, though we couldn’t quite say how. We know this much at least: the Orwellian background serves as a plot device to motivate each of the two interrelated stories, akin to the Paris Commune uprising serving as a mainspring for plot developments in Les Miz. And everyone loved the synesthesia.

As is always the case at the Contemporary American Theater Festival, the production values are superb. The set, by the reliable David M. Barber, rose to the unusual challenge of taking a large space, the stage at the Frank Center on the Shepherd University campus, accommodating a large feature (a bank of windows through which back projections like Stalin’s Big Brother countenance or Soviet apartment block prospects could be seen), and still making the rooms in front of it feel small. Part of the trick was to turn the areas abutting those windows into openwork changing spaces, important since three of the four performers had multiple roles, requiring changes of costume, often followed by speedy returns to the field. In other words, the set made a virtue of necessity.

Joey Parsons and Lee Sellars by now also qualify as reliable. They have not only memorably acquitted themselves in previous seasons at CATF that I’ve witnessed, but each is holding down demanding roles in other plays in this season’s Festival. I think it would be overstating the case to say that their current parts in Memoirs posed the same level of challenge as these other roles, but I can say these parts demanded and showcased these performers’ range. Parsons, whose role in another play calls for her to be living a life of quiet desperation that degenerates into explosively tearful noisy desperation, gives us here a Natalya trained by life in a repressive world to be always controlled, and to give little or nothing away. And of course Parsons also does fine with the stock type, the babushka prying into neighbors’ business, apparently a fixture in every apartment house in the old Soviet Union. Similarly, Sellars, who in another current show portrays an agreeable working man with a marriage in slight disrepair, here provides a bureaucrat exuding a silky and sometimes brusque menace mixed with a slight note of vulnerability.

Festival newcomer McElwee probably faced the greatest demands, reconciling character traits not often found in nature, alone or together, and showing, along with those, a human face. His bewilderment and desperation were at times funny and at times moving. But because of the uniqueness of the character, you cannot call them topical.

The playwright openly announces her hopes for the topicality of the play in notes at the head of the script. The play, she writes, “forces the audience to consider the fragility of democracy itself in an era when facts are fungible and history is whatever you say it is.” I don’t think it actually does that. The constantly revised lies we hear today, for instance, over whether someone was fired for one reason or another, or whether a payoff to someone was known to someone else, do not rise to the level of affront to good governance that occurs when official government and media records are revised to give the appearance that former government officials never existed or spoke. The former lies may be on the same continuum as the latter, but the latter ones were parts of campaigns in which millions were slain. The current body count is not comparable. And numbers matter. Lethality matters.

If you come to this show, then, do not expect to participate in a truly topical think piece. You will witness instead a pair of entwined tales about a rare mental abnormality and a somewhat overexposed aspect of totalitarianism. It is the telling of the tales, the acting and the scenery and, oh, yes, the synesthesia, by which Memoirs will work for you, or not.