Delicious Fun in THE CAKE at Contemporary American Theater Festival

Delicious Fun in THE CAKE at Contemporary American Theater Festival 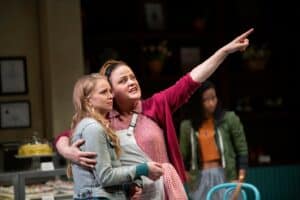 It would be pointless to discuss Bekah Brunstetter‘s delightful comedy The Cake without comparisons to Waitress, if only because the two shows start in almost the exact same way. In each, a woman whose creativity and self-expression has been poured into baking makes a statement that foreshadows the entire show, couched in baking terms. In Waitress, Jenna sings about what’s inside her pies: “My whole life is in here/ In this kitchen, baking / What a mess I’m making” – and of course we know that Jenna’s forthcoming struggle is to bring the mess of her life under control. In The Cake, Della forecasts a struggle of a different sort: to, in her parlance, “Follow. The. Directions.” To Della, recipes are sure guides to baking success: “If you’re not gonna give your time and your worship to directions that have been crafted by trial and error, you might as well do a darn cake from a box, which tastes like scotch tape dipped in Splenda if you’re asking.”

It does not take us long to learn what directions Della (Erika Rolfsrud), a 50s-ish cake shop owner, is going to be trying to follow. Through her bake shop’s front door come Macy and then Jen (Monet and Kelly Gibson), same-sex fiancees. Jen, we learn, is something of a niece to Della, and before Della twigs that Jen is planning to marry another woman, Della is overjoyed to be asked to make Jen’s wedding cake. After she gets that missing piece of information, however, she grows evasive. Della considers the Bible inerrant (she insists there were dinosaurs on Noah’s ark), and knows that her faith would frown. To her plumber husband Tim (Lee Sellars), there is no issue. “We know we can’t pick and choose the bible, honey. That’s when the edges start to blur. Fabric starts to fray.” But Della cannot make up her mind so easily.

It is plain that Della’s resolution of the issue will call for a gingerly reassessment of her faith and her life. Among other things, she can pick up the sexual current between Macy and Jen, and it contrasts with what goes on (or more accurately no longer does) between her and Tim in the bedroom. She takes some very funny steps to remedy that defect, topped by an even funnier riposte by Tim, and it appears that this problem will be solved. But the bigger problem, whether to bake the wedding cake or not, remains, and, realistically, it will not be solved wholesale by Della’s discarding of her allegiance to what Macy dismisses as “a book that’s thousands of years old.” If Della is to find a way, it will require more subtlety and compromise.

Along the way, Della’s travails are echoed and to some degree parodied by her appearances (real and imagined) as a competitor on the Great American Baking Show. At times, the comments of the host or judge (named in the script just THE VOICE) are the normal chivying of an MC on a contest program, but sometimes they become more inquisitorial, a kind of tribunal of Della’s conscience. “Well to guarantee your spot on next week’s show, just don’t make any mistakes ever!” Rolfsrud, being a natural comedienne, knocks these interchanges out of the park.

Della’s struggles are the main event, to be sure, but there is an undercard, the tensions between Jen and Macy. Jen has planned the wedding for her hometown (Winston, NC), and to the greatest extent possible she wants to affirm her Southern roots and her family ties with the ceremony, even though she knows that her late mother, whose wishes she is also trying to honor, would not have approved of a wedding with two brides. Macy, who is African American and from the north, and who does not even eat cake (to avoid gluten), has limits to her tolerance of homophobia even among those her intended loves. She even takes a step that has the potential to drive a deep wedge between Della and Jen.

This being a comedy, though, we know that somehow both faith and love (gay and straight) will triumph, that everyone will end up being affirmed, that gluten cannot be avoided forever, and that many folks in the audience will have lumps in their throats before the end.

I seem to find repeated reasons to compliment David Barber‘s sets, and this one is no exception – except that this time I applaud his willingness to quote. As I said above, this show cannot avoid comparison with Waitress, and this set has many elements, down to the store sign, the large window, and the color scheme, in common with Scott Pask‘s Waitress set. Sometimes imitation is the sincerest form of common sense.

Of the shows in this year’s Contemporary American Theater Festival, this one is by far the most sheer fun.