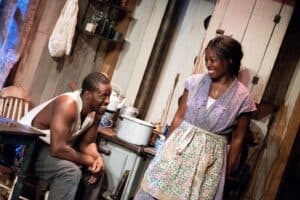 The problem of the prison industrial complex lies squarely at the heart of Angelica Chéri’s Berta, Berta, now in a world premiere performance at the Contemporary American Theater Festival in Shepherdstown, WV. The phrase prison industrial complex is a relative neologism. But the phenomenon it describes is old news: the widespread incarceration of mostly nonwhite Americans, mostly for victimless drug crimes, motivated to a great extent by the economic imperative to run prisons which employ correctional workers and to provide the state or its private contractors with the benefit of the cheap labor of inmates. The play takes place in Meridian, Mississippi in 1920, but it is just an earlier chapter in the same story.

At the opening, Leroy (Jason Brown) appears before us, having been released some months earlier from Mississippi’s Parchman prison, a notorious place which figures in the writings of Grisham and Faulkner and in many a blues song, and was operated in 1920 (and today), as a great prison farm. Though freed, Leroy stands there doomed, knowing he will have to return. As Leroy tells it: “Parchman? That’s where they take the Colored man to kill him from the inside out.” He was committed to the system not because he had committed any crime, but basically to meet the system’s needs. But his being, as he puts it, already killed inside upon his release assures, if only indirectly, that he will return. The exact mechanism triggering his liability to be returned is only fitfully made known to the audience and to the eponymous Berta (Bianca LaVerne Jones), Leroy’s love until he disappeared three years earlier (into Parchman, unbeknownst to her).

So, upon Leroy’s sudden reappearance, Berta and Leroy have much catching up – and fighting and making up and laughing and living – to do. Much has happened in both their lives since fate separated them, and they have a great deal they need to share. They have one night to do it, spent in her home, a humble shack (in a beautifully-realized set by Luciana Stecconi, augmented by John Ambrosone‘s lighting, which comes in from unexpected but telling places).

The title, the playwright tells us, is the title of a Parchman-specific field work song she encountered when it was sung in August Wilson‘s The Piano Lesson. Some anonymous prisoner in the vast flat Delta fields of Parchman may have had an actual Berta to sing of while he toiled. But time has washed away all specific information about the singer and his love. Like most folk music, it is sparing of details, though rich in suggestion, and of course all the more intriguing for that. The song does implicitly communicate as a simple fact, not even necessary to remark upon, that Parchman is forever; it acknowledges that Berta should not wait for the inmate-singer, but should marry “a railroad man.” But apparently to playwright Chéri, that fragment of data is not nearly enough. Consequently, she describes the play as her attempt at an origin story for the song. Since neither Leroy nor Berta sings or composes the song, the phrase “origin story” can only suggest that the song was written about them, though by whom or how is not suggested, even in the play.

Jones gives us a Berta a man would want to compose a song about, however. Her face, her eyes, the modulations of her voice, like the song itself, communicate so much more than the lines she delivers. “Berta is a voluptuous, stately Black woman with a striking countenance,” say the directions. Just so. And if Leroy is unfortunately fated to be a prisoner, Berta is fated to be free; Jones makes us believe it, makes us feel that there is something indomitable about her. Berta, one feels, must and will go on. We have little idea what her future will look like, but that much feels true.

Jason Bowen makes what can be made of Leroy, although at some points the character feels more like an artifact of the plot and the message than a coherent personality. One feels that Chéri envisions him as simply a victim, but Leroy has an unacknowledged degree of personal agency and culpability in the reasons he must return to Parchman. Bowen must therefore play Leroy as a more admirable character than his actions justify. This is tough for an actor, and tough for an audience.

Not unbearably tough, though. Audiences will come away moved, and a bit more (to use today’s phrase) woke, for having been through this experience.