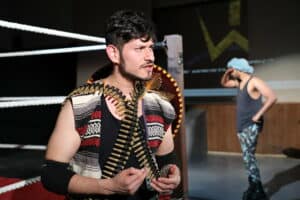 Is pro wrestling a form of theater? That is one question Kristoffer Diaz‘s The Elaborate Entrance of Chad Deity, now being presented by Cohesion Theatre, uh – wrestles with. As the show chronicles, a wrestling ring, like a theater, is a place of infinite artifice, where nonetheless, if an audience is lucky, something real happens, or at least something real can be learned. That is the pitch the play makes for the “sport.” (It has to be in quotes because there is no actual competition; that is the genius of the artifice.) I, knowing too little of wrestling, and perhaps too dazzled by the hall of mirrors the play provides, left neither convinced nor unconvinced. But I certainly left both provoked and entertained.

Artifice first: on the evidence of the play, marshaled by narrator and participant Macedonio Guerra (aka “The Mace”) (Christian Gonzalez), the ritual wrestling enacts is one of pre-designated heroes and villains, excessively and absurdly delineated, and the “sport’s” audience knows this full well. The outcome of each match, as the audience also knows, is fixed, and while there may be a series of matches over a period giving shape to a story arc, at the end of the arc, the hero will beat the villain. It is a ritual of scapegoating, of the bullfight, in which the anxieties and sins of the community are concentrated in a character who is first hated and then defeated.

The Mace is one of those fake villains, and his soliloquies, like those of bona fide villain Richard III, are mini-lectures which inspire much appreciation of the art and craft of villainy. We learn that in pro wrestling the villain, the one who sets up and takes the falls, is actually doing most of the work, and must be much better at what he does than the hero. Case in point, the eponymous Chad Deity (Tim German), a handsome devil with a great smile, but not actually much of an athlete despite the ornate belt he wears to enter the ring, not to mention the also eponymous elaborate entrance by which he arrives there, an honor denied The Mace.

What is the reality underlying this artifice? At least in this play, that the spectacle is enacted by a crew of young journeymen with deep roots in urban ethnic communities located in places like the outer boroughs of New York, where a sort of patois, part hiphop, part Spanglish, part god-knows-what, reigns. The Mace, of Puerto Rican extraction but designated to wrestle under a Cuban/Mexican identity (see photo above), leaves his home in the Bronx to visit a baskeball court in Brooklyn and there meets Indian-American Vigneshwar Paduar, V.P. for short (Jehan Sterling Silva), who will in due course be presented as The Fundamentalist, a turbaned Muslim villain (also in photo above) of an indeterminate Mideastern nationality. Intrigued by V.P.’s social fluency, highlighted by his effortless ability to flirt with young women in six languages, The Mace sells the unctuous Everett K. Olson, impresario of THE Wrestling (based apparently on WWE) (Jason Hentrich), on working V.P. into the lineup.

And the reality that this artifice is supposed to teach? Here a reviewer must tread lightly to avoid giving too much away. But it starts with the manner in which the mythos of pro wrestling is designed to hold a mirror up to its audience. The bad guy is supposed to proclaim how much he despises American values, and to be himself despicable for that very reason. But when we boo him, what are we booing? The foreign, the unknown, the threatening, the challenge to our self-righteousness. We don our Make America Great Again hats. But in a world where more and more of us are from the Outer Boroughs in one way or another, can the viewpoint hold? That is the question we are left with at the end.

I called the play a hall of mirrors, and it is, because in one way or another, every character is thoroughly coopted by the joint enterprise of selling this hokum, as is the ringside audience, whose participation is equally vital to the final product. When everyone is both deceiver and deceived, though, what moral responsibility can reasonably be assessed for an only nominally deceptive spectacle, and, if so, against whom? Where so much hard work is required to stage that spectacle, should we in the theatrical audience admire or be appalled merely because of the ugliness of the bigotries and shoddy thinking to which the spectacle caters, or should we still give credit to the workmanlike and even loving way the spectacle’s surface is curated? If we condemn it, are we being righteous critics or effete snobs? You can get dizzy thinking about these issues.

There will be no confusion at all, however, in assessing the vitality and interest of this show. In its four years in our midst, Cohesion has been remarkable for the scope and ambition of its programming, especially on what are evidently shoestring budgets. Almost every show, whether it entirely works or not, seems to bring us something we haven’t seen before. (Graphic novels brought to life! Romantic absurdism! Dadaistic storytelling! Shakespearean history, Appalachian style! Anorexia contests! All in a day’s work.)

This play is no exception. Presented mostly in an apparently realistic ring with apparently authentic wrestling moves (authentic inauthenticity, if you will), this is a drama whose physical setting is no more unconventional than its social setting or the questions it (sorry!) grapples with. And, while this play enjoyed considerable esteem in Chicago, where it originated in 2009, and Off-Broadway, where it appeared in 2010 (winning, among other things, the Lucille Lortel Outstanding Play award), and in numerous productions around the country, I had never heard of it, and I’ll bet most of Cohesion’s fans hadn’t either.

And this production does it all in style. Devoid of the questionable casting decisions that have weakened some recent Cohesion productions, in this show, where ethnicity matters, the representation is believable, and the performances are spot on. In particular, Christian Gonzalez as Mace seems to explore the full limits of his part, reflecting each ambivalence the play raises. (In his Nuyorican-ness, both less and more typical of the nation in this demographic era. Cynical about wrestling’s phoniness but exultant in its artistry. Pining for an elaborate entrance of his own but proud of his importance in the real work of the wrestling industry.) For all the fractured quality of his passions and his allegiances, Mace always comes across as a real, tortured person, not a mere cobbled-together narrative construct, as he might in the hands of a lesser actor. And the direction by Daniel Douek, lighting by Serafina Donahue, costumes by Helenmary Ball, and especially fight choreography by Jonathan Ezra Rubin, are all outstanding.

Only here through June 17, so hurry!