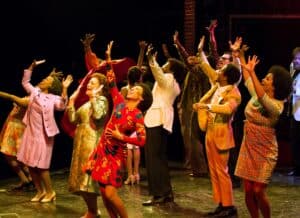 Soul: The Stax Musical, the world premiere of which is the final offering of Center Stage’s 2017-18 season, follows closely the major historical facts about the regrettably short life of Stax Records, the influential R&B label. For a company that abruptly disappeared into bankruptcy in 1975, its oeuvre and the history have been surprisingly thoroughly curated, and no visit to Memphis, the label’s home, is complete without a pilgrimage to the intersection of College and McLemore, the site of the converted movie theater that was the label’s headquarters over its entire trajectory, and is now a museum, bookstore, and anchor for a music-oriented college prep school adjacent to the site.

In light of the completeness of the musical and documentary history, simply retelling the history was the obvious choice in crafting this show. Every jukebox musical must choose one of three basic strategies: tell the history of the music and musicians (Motown), recreate or imagine a performance (Rain), or make up a new story using the songs (Rock of Ages). The actual story here has the virtues of availability (thanks to the curators of the Stax heritage), compactness (the company went womb to tomb in only 18 years), unexpected characters (white folks who founded a black label), conflict (mostly on the business side, less on the creative), great singers and musicians (lovingly recreated), and wonderful music for them to perform (by artists like Booker T. & the MGs, Isaac Hayes, Sam and Dave, the Staples Singers, and Carla Thomas). What would be the benefit of taking any other route to bringing all this to the musical stage?

Actually, there is another answer, although I think it would come in a distant second: in the hundreds of tracks Stax recorded, there are all sorts of songs, particularly about love, that could have been strung together to frame a story. (For instance, consider the possibilities in two of the late-period numbers, The Soul Children’s I’ll Be the Other Woman (1973) and Shirley Brown‘s imagined address by a rightful wife to that other woman, Woman to Woman (1974).) Maybe someone else will do that.

But if we’re impatient – and what audience isn’t? – when decent simulacra are obtainable, we don’t want to experience songs revamped to fit imaginary characters. No, if we’re honest, we want the same songs we (or our parents or grandparents, as the case may be) grew up with, every note of the horn arrangements, and the original singer’s voice, imparting each smidgen of intonation and pacing that the original singer added to the song. We want impersonation. And in this production, directed by Kwame Kwei-Armah, we get nearly that.

The historical frame is perfect for catering to that simple but demanding taste: You want to see Otis Redding singing (Sittin’ On) The Dock of the Bay? Fine, we’ve reached 1967 in the story, so here he is! And damn, doesn’t he sound good?

Given these permissive parameters, the book, by Matthew Benjamin, is free to amble amiably from one hit to the next in chronological order, and to give us such hits as Soul Man, Try a Little Tenderness, Walking The Dog, Walk On By (the Isaac Hayes, not the Dionne Warwick, rendering), Mr. Big Stuff, Respect Yourself, and Hold On, I’m Comin’. And the performers are simply amazing in recreating the sound, and often the look, of their historical originals.

For instance, if there was much daylight between Ricky Fante’s intonations of Dock of the Bay and those of Otis Redding, I didn’t sense it. And while Boise Holmes‘ voice might be a bit more tenor-ish than Isaac Hayes‘ glorious bass-baritone, the impersonation is still startling, particularly given the physical similarities.

And when we get to appearance, the startling-ness continues. With proper makeup and costuming, Robert Lenzi‘s resemblance to co-founder Jim Stewart, Warner Miller‘s to part-owner Al Bell, and Rick Fante’s to Redding, are all ringer-worthy.

This is not to say that everything is strictly historical. For instance, the opening number of the show, Sweet Soul Music, is an ensemble rendering of Arthur Conley and Otis Redding‘s reworking of a Sam Cooke song that was not recorded at Stax’s Memphis Studio and Conley did not release on Stax. But hey, when you’re instantly plunged by it into the wonder that was Stax, who’s counting?

I would be remiss not to mention the outstanding performances by Harrison White and Allison Semmes as father-and-daughter performers Rufus and Carla Thomas. Which is not to slight the rest of the cast, too numerous to acknowledge individually, or the half-glimpsed members of the eight-piece band, nor the period-inflected choreography of Chase Brock.

In short, as John Lennon sang on the other side of the water the same year Sweet Soul Music was a hit: “A splendid time is guaranteed for all.”

For Baltimore audiences, this show is more than an entry into the jukebox musical stakes, to be shelved with Motown and Memphis or Director Kwei-Armah’s own Marley(which premiered here three years ago); this is the local swan song, at least for the moment, of Kwei-Armah, who is returning to his native England. Local audiences know full well how much we owe him for his seven years as Artistic Director at Center Stage. His arrival was a shot of Naloxone for a Center Stage that seemed to be slipping into a coma. Everything seemed brighter and more vivid under his directorship, even the shows that didn’t completely work. His emphasis, as well, on including non-white and gay playwrights, performers and audiences, changed the tone of the enterprise to a joyful cacophony. He leaves gargantuan shoes to fill.