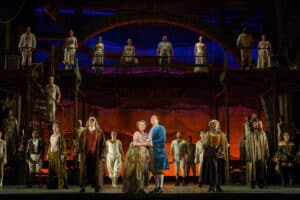 It’s hard to know how to categorize composer Leonard Bernstein‘s Candide, now in a Washington National Opera revival (based on a 2015 Glimmerglass Festival production) at the Kennedy Center.

Musically, Candide is half-light opera, half-musical. Some of the numbers require classical voice training, while some could and probably should be sung by Broadway-style performers. The chorus needs Broadway-style dancing abilities but has to back up the operatic numbers vocally.

Dramatically, the label “light opera,” while appropriate enough for the music, seems way off when applied to the subject matter or the treatment. When you hear the first few notes of the rollicking overture, you know Bernstein is genuflecting hard to Johann Strauss. Yet this is a story in which the principal characters are bayoneted, hanged, maimed, raped, prostituted, ravaged by disease, and enslaved, among other things, a story which, thematically, takes the characters and us right to the edge of the Nietzschean abyss and gives us a good long sobering look into it – not the sort of thing Strauss or Gilbert and Sullivan ever did. As in the song Auto-da-fe (“What a day, what a day, for an auto-da-fe!”), the juxtaposition of cheery music and grim subject-matter is deliberate.

Complicating matters still further is that there is not one Candide but multitudes. The original work, which premiered on Broadway in 1956, had Broadway orchestration and a book by Lillian Hellman and lyrics by Richard Wilbur, John Latouche and Dorothy Parker(and others). Bernstein went on to craft (and then revise) a score for symphony-sized ensembles (like the near-symphony-sized Washington National Opera Orchestra). Independently, there have been lots of other sets of books and lyrics. Hellman’s book is no longer performed today; instead the foundation is generally a 1973 book by Hugh Wheeler and Stephen Sondheim, with the additional twist that there are at least two versions of that – and that the current production is a 1999 revision of those revisions by John Caird. Are we confused yet?

No one tinkers this way with shows that started out perfect to begin with. Clearly Candide has its problems. Yet the brilliance of the piece from first (as witnessed by the original original-cast album) to last (as witnessed by today’s rendering) frequently takes one’s breath away. With only the oft-performed operetta-like Overture, the coloratura aria Glitter and Be Gay, and the magnificent finale Make Our Garden Grow and no fixes whatsoever, the work would still be assured immortality, problems be damned. And to me, the most important of these is the finale.

One reviewer of an earlier production commented that he never heard the finale without tears. I am the same way, and was that way even with my official reviewer’s notebook clutched in my hand. Why? The answer takes you to the heart of the show, to the heart of what makes the show most different from the 1759 fable by Voltaire upon which it was based.

Voltaire’s principal stimulus was the desire to lampoon what he saw as the inaccuracy and pointlessness of the philosophical and religious outlooks that (in his view) plagued European and European-colonial society. With an unnecessary heavy-handedness brought on by his reflexive anti-clericalism and his genteel anti-Semitism, he (in his mind) dispensed with any claims to philosophical truth in either Christian or Jewish doctrine by depicting churchmen who are venal and voluptuary and a Jewish banker who is cruel – and voluptuary. With more wit and subtlety Voltaire skewered Leibnizian optimism with his portrait of Dr. Pangloss, who teaches his students that ours is the best possible universe; Voltaire’s refutation was to show in an over-the-top way how cruel, arbitrary, and distressing life can be, including all the previously-mentioned violence inflicted on his principal characters. His protagonist, young student Candide, originally an adherent of Pangloss’s philosophy, comes to regard all philosophizing as a waste of time, and turns his life over to farming, to making his garden grow.

Bernstein and his collaborators, especially after Hellman was dropped, were after something deeper. Candide (sung here by tenor Alek Shrader) is on a quest for the meaning of life. He and his close associates Cunegonde (Emily Pogoreic), the Old Lady (Denyce Graves), Maximilian (Edward Nelson), Martin (Matthew Scollin), and Cacambo (Frederick Ballentine), are in addition to Candide’s personal quest, collectively striving to achieve a good life, which (it turns out) necessarily implies that one’s life be both free of illusion and fulfilling. Dr. Pangloss (Wynn Harmon) promises to provide the key to succeeding in both quests, and of course is humiliated in the process because his optimism is utterly inadequate juxtaposed with the horrors of which both man and nature are capable. In light of this inadequacy and in the absence of other viable ways of establishing that life has meaning, Candide chooses an existential course of forging his own meaning in the dignity of farming and hard work. In other words, Candide’s ultimate choices are close to religious ones, and if we were in any doubt about that, Bernstein’s music for the finale would tell us. As contrasted with Voltaire’s somewhat superficial cynicism, communicated with chilly humor, Bernstein’s finale is profoundly disillusioned, profoundly sad, profoundly determined, and yet in the strangest way hopeful too. That is why we cry when we hear it. (This production’s finale is captured in the photo above.)

This is not to say that it is easy to get to that point. A personal story: I and my family were introduced to the music by some friends of my parents who had us over for brunch one Sunday a year or two after the original cast album came out. They played part of it for us. I believe it was two months later that the wife of that couple hanged herself. I’m not suggesting that Bernstein’s music drove her to it, of course, but I would not be shocked if part of what did was her own look into the Nietzschean void that this work also evokes. This show could plausibly have provided theme music, as it were, to that look and to her ultimate choices. It is not either weak stuff or tame; it will affect your mood.

Afficionados of Bernstein (whose hundredth birthday celebrations this year have occasioned this revival) will know that the religious quest of Candide and his companions is part and parcel of Bernstein’s own religious quest, one he returned to repeatedly through much of his most important work, whether we’re talking about Jeremiah, Kaddish, the Chichester Psalms, or Mass. Continually, we see how man’s inhumanity to man leads Bernstein to question how there could be a God, and how Bernstein nevertheless cannot really let go of faith, or of a belief that life has meaning and norms that are outside ourselves. In connection with another project years ago, I interviewed conductor Marin Alsop, a Bernstein protégée, and asked her if she thought Bernstein had ever resolved this conflict in his own mind, and she opined he had come down on the side of faith. I do not have my own answer to this question.

I was interested, however, to see in the composer’s daughter Jamie Bernstein’s program notes, the following: “…[T]he music is telling us something more: the soaring chorus seems to be telling us that growing our garden is a metaphor for the flowering of mankind itself!” And she adds that well-known cynic Lillian Hellman did “sign off on the musical’s finale, … and that makes me think that … Hellman … would ultimately be in agreement with the composer’s expression of purest optimism.”

As a drama critic, I lack the tools to critique the operatic end of the performance. To my ears, the singing all seemed splendid, and the large orchestra, conducted by Nicole Paiement, did well too (a couple of what sounded like trumpet fluffs aside). As a dramatic performance, it was – how to say this? – a full exploitation of the opportunities the book provided. I am not the first to observe that the second act has its longeurs, and that the catalogue of horrors goes on too long and becomes repetitious. But I thought Wynn Harmon‘s turn as Pangloss and also Pangloss’s creator Voltaire was wonderful. Denyce Graves kept me laughing with bits of accent and funny business as the Old Lady. Emily Pogoreic’s singing blew me away. And Alek Shrader was moving and amusing as the lead. I loved Jennifer Moeller‘s costumes, particularly the feathery and sparkly gold Las Vegas-y things the inhabitants of Eldorado wear. So I was quite ready to forgive the overlength problem.