Handing it to the Devil: Stillpointe Presents HAND TO GOD

Handing it to the Devil: Stillpointe Presents HAND TO GOD 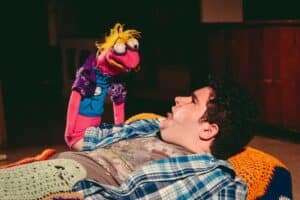 The play Hand to God, being presented for three weekends by Stillpointe Theatre, is a violent, obscene, sacrilegious attack on everything that reportedly formed playwright Robert Askins. Southern fundamentalist Lutheranism – check! Didactic sock puppets – check! A mom who runs the sock puppet program – check! Deceased dad – check! And – one assumes, untidy libidinous impulses that could not be squared with the conventional morality, leading to contempt for the conventional morality, leading to contempt for the kind of theology that, at least in southwest Texas, undergirds it.

It is a truism among Christians of all stripes that we are all sinners, and, though Askins might have a problem with using the word “sin” to describe anything worse than conduct that makes us unwelcome around the communal campfire, we certainly see a lot of sin (however defined) in the approximate hour that it takes for Askins’ fable to play out. There is teacher Margery (Valarie Perez-Schere), who, in the wake of losing an (admittedly uninspiring) husband, is also losing her grip on her son, although she is all too ready to come to physical grips with her son’s classmate – and her student – Timmy (Parker Damm), a readiness Timmy shares. There is Pastor Greg (David Iden), who also clearly lusts after widow Margery, and is not above a little sexual harassment, not to mention overbearing conduct in the matter of scheduling a puppet performance. There is young puppeteer Jessica (Liz Galuardi), who may be a bit young for the hyper-sexualized proceedings that seem to be par for the course in Cypress, Texas, where the show is set, but is ready for her sock puppet to engage in all manner of erotic expression. And most of all there is Jason, or should one say Tyrone, Jason’s sock-puppet alter ego who may also be the Devil (Michael Paradiso), guilty of telling hurtful truths – and mayhem (the nature of which I shall not give away, except to suggest that spectators in St. Mark’s Church basement, where the show is presented, might wish not to sit too close to the floral lamp).

As far as Askins is concerned, then, a religious congregation is no less and no more sinful than any other group. The point seems to be the same as was made at the end of Candide: “We’re neither pure nor wise nor good” and the best we can aspire to is to “make some sense of life.” And part of the sense Askins thinks we should make is that what we call Jesus and what we call the Devil are but two atavars of identical human impulses.

It helps that this attack on sanctimonious pretensions is put across by such a spirited ensemble, game with lascivious behavior, violence, f-bombs and sock-puppets, and blessed with considerable talent, including the manual dexterity to bring socks to life. It also helps that the show is presented in the round, in the intimate space of a church basement (at one dialectically critical point, Tyrone makes the circuit establishing whatever in the sock-puppet world corresponds to eye-contact with each spectator). And finally, it must be said, it helps that in this environment (i.e. not Texas) Askins is probably preaching to the converted; the catchment demographic for Stillpointe here in Baltimore is probably not heavily stocked with evangelicals, prudes, or the easily offended. If you’re none of the above, this show will probably make you laugh through the winces. If you are some of the above, come all the same, and see how the other half thinks.

In short, this is good, dirty, thought-provoking fun. And it won’t be here long. So make plans to go right now.