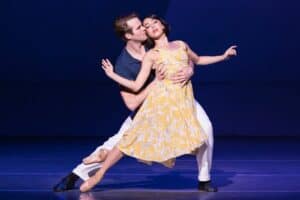 Of course director Vincente Minelli’s 1951 movie musical An American in Paris is a landmark of popular culture, perhaps the apogee of the MGM musicals. But one suspects that director and choreographer Christopher Wheeldon and book author Craig Lucas, the creative minds behind the stage updating of that movie, now perched through Sunday at Baltimore’s Hippodrome, weren’t totally feeling it. And going back and watching the movie, neither was I. I was surprised at all the things that looked wrong on the screen, and it was clear to me, when I first saw the stage adaptation, that Wheeldon and Lucas had fixed many of those very things I spotted.

Clearly, Minelli and his collaborators had set out to capture some of the exuberance that infected Americans in postwar Europe, and I think that those who love the movie are partly responding to that sense of glamour. As it happens, I myself enjoyed a bit of the privileged life of postwar Americans in Europe, albeit as a small child, in 1952 and 1953. And yes, there certainly was a glamour to it. But that experience also gave me enough insight to state that what the movie presents is more false than true. The moviemakers missed the way Europe was still reeling, trying to clear away rubble, restart industry, and resettle various diasporas, all amid massive poverty. Americans living there were uneasy beneficiaries of the ruin their military might had partly inflicted. In France, as Mary Louise Roberts has revealed in her book What Soldiers Do, Americans during what amounted to an occupation had drawn much resentment for their debaucheries and their rapes of Frenchwomen. The Third Man, with its profiteering, corruption, and strong suggestions of prostitution, is a much more accurate cinematic snapshot of the mood of that period than An American in Paris. The Americans were still overlords, economic and military. There might have been a few penniless bohemians among them, like Jerry, the character Gene Kelly portrayed in the movie (one of my father’s childhood friends, most likely gay, had run away to Paris to live like that), but it would have been hard to disassociate most of the Americans in Europe from the spoils of victory.

Thus the notion one would get from the movie, that to be American in that Europe was to be adored and easily accepted, was an oversimplification. The movie did not do well in France (to MGM’s surprise), largely, I suspect, because to the French that oversimplification was not appreciated. Wheeldon and Lucas have intelligently darkened things, by emphasizing the horrors of the war and the German occupation (barely touched on in the movie), by depicting post-war reprisals against collaborators, and by explicitly making the character of Lise (the war orphan gamine heroine, portrayed in the movie by Leslie Caron) a Jew who had survived the war because she had been sheltered by the gentile family of Henri, her now-betrothed. (In the original’s script, Lise’s parents had only “worked with the Resistance.”)

Another thing just wrong with the movie which no one seems to comment upon, but which seems just as obvious to me, was the palpable age difference between Kelly and Caron. The day the movie was released, Kelly was and looked 39, and Caron was and looked only 20. Kelly had lost none of his athleticism, but his was no longer a young man’s profile. The notion of him romancing a very youthful woman half his age was putting a good face indeed on Kelly’s appeal. Meanwhile, the supposedly too-old-for-Jerry rich woman, Milo, played by Nina Foch, twelve years Kelly’s junior, looks far more age-appropriate for him than he for Caron. In the current musical, there is no such gap between McGee Maddox, today’s Jerry, and Allison Walsh, today’s Lise, pictured together above. Each looks youthful and in the contemporary argot, hot. As the picture shows, they belong in the same frame. (Nearly the same can be said of Kristen Scott, who looks only a touch older as Milo, the rich woman.)

Likewise, in the movie, the supposed wrongness of the projected match between Lise and Henri, here portrayed by Ben Michael) has no obvious explanation (even if you discount an age discrepancy between Caron and Georges Guétary not much smaller than that between Caron and Kelly), nor does the fact that Henri ultimately yields and lets her go to Jerry. The musical strongly suggests, however, that Henri is gay, although the script does not quite resolve the point. But that suggestion makes Henri’s decision to release Lise from their engagement much more explicable.

The most celebrated part of the movie is the 17-minute ballet sequence at the end, in which Jerry chases Lise though scenes suggested by artists Dufy, Renoir, Utrillo, Rousseau, van Gogh, and Toulouse-Lautrec. It reportedly cost MGM half a million 1951 dollars to make. I know we are all supposed to admire it for various reasons, but to me the artwork and design combine to make that quarter-hour an endless evocation of the feeling also induced by kitschy Ferrante-and-Teicher album covers of the era. It’s about as exotically foreign as French vanilla ice cream. As that ballet is reimagined on today’s stage, there is still borrowing from French artwork, but it seems more postwar by far; especially one can see the influence of Mondrian. The effect may be a trifle more austere, but the kitschiness is banished.

In sum, then, Wheeldon and Lucas have dodged a lot of the bullets that damaged the 1951 production, for all the acclaim the original may have received. But the modern recasting of the work salvages almost everything that worked well. The sturdy keel of both productions was George Gershwin‘s music and the songbook he created with his brother Ira Gershwin, although they have made somewhat dissimilar selections; only four numbers from the movie, including the two balletic George Gershwin pieces An American in Paris and Concerto in F, and the nightclub show number, I’ll Build a Stairway to Paradise, make it into the musical. And where the choices differ, I prefer Wheeldon and Lucas’s, especially I Got Rhythm, which is shown being recrafted from a moody piece into a lively one, much as Jersey Boys uses a song to show the creative process that led to the Four Seasons’ distinctive sound, or in the biopic Delovely, we watch while Cole Porter instructs a singer how to remake Night and Day from a hard-to-sing trifle into the haunting thing it is.

The handling of I Got Rhythm, successful as it is, does nonetheless highlight about the only disimprovement I could spot in the adaptation, the loss of Oscar Levant. Afficionados of the movie will no doubt count Gershwin friend and proponent Levant’s performance as one of the things they loved best. Playing a composer named Adam who was to all intents and purposes Levant himself, Levant exhibited a rapport with Kelly that was utterly magical, and most particularly in the very song, Tra-La-La (This Time It’s Really Love) which most corresponded to I Got Rhythm in the stage musical. The rapport was not merely the tight integration of Levant’s piano-playing with Kelly’s tap-dancing; it was the effortless-seeming way in which Kelly’s part of the act sometimes impinged on Levant’s (Kelly, for instance, lying atop the grand piano, hitting some of the higher notes from above while Levant was tickling the lower ivories), or vice versa (Levant getting pushed momentarily from his piano stool to do a song-and-dance riff with Kelly). Maddox and Matthew Scott (today’s Adam) share the stage well together, but they don’t even try for such elevated schtick.

The musical might best be described as a contemporarily idealized version of the film, a rendering of what the film might have looked like in an era more inclined to be honest about the American role in postwar Europe, the toll of anti-Semitism in France, and homosexuality. Also it is more an artifact of this era’s norm in which musicals aspire to be integrated narratives that resemble plays more than variety shows. The story works a lot better as a real story.

And so, what is moral of the story? It seems to be that life is a ballet, and that true love is the unmistakable chemistry of two souls as right for each other as a prima ballerina and her male counterpart. And the corollary is that, if you’re not one of that blessed pairing, as Milo, Henri, and Adam are not, you need to recognize it and just get out of the way. You’ll at least be able to breathe in the trail of stardust the lovers leave behind.

And what a trail of stardust the whole musical leaves, both for the characters and the audience! There are the sets and lighting, already mentioned, which dazzle in their nimble evocation of the wonders of Paris, with a side-step into a fantasy nightclub that seems to be Radio City Music Hall, complete with spangled leggy chorines and dudes in top hats and tails. There is the dancing of the athletic Maddox and the graceful Walsh. (How many performers out there can claim true balletic chops, skill at acting and singing – and the aforementioned hotness?) And the word “dazzling” seems to have been coined for Gershwin’s music, generously ladled over the entire enterprise, and beautifully performed.

Only here through Sunday. So dance on over.