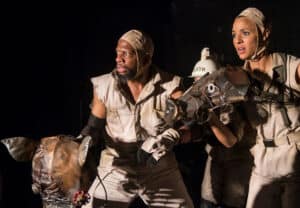 Few of us leave high school without first having been exposed to George Orwell‘s 1945 allegorical novel Animal Farm, and for good reason: the book is short and simple yet also deep, perfect for initial forays into critical reading. Like most allegories, Animal Farmsports a plain, uncluttered surface, but reveals great riches just below. Hence the tale of Farmer Jones, the initial proprietor of the eponymous farm, and of his various animals, displays a close resemblance to the history of the Russian revolution and its aftermath. The animals’ uprising starts with a noble and inspiring ideology, soon challenged by the emergence of a commissar class, the exploitation of the very proletariat the revolution is supposed to serve, show trials, revisionist history, breathtakingly dishonest propaganda, ill-conceived industrial projects, a cult of personality around the supreme leader, cynical exploitation of the personae of revolutionary heroes, etc. And then, beneath that amusing if discouraging set of correspondences, there lies a critique of authoritarian regimes generally, of both the left and the right.

It gives little away to say that, in Orwell’s grim assessment, revolutions of the left and right alike seldom deliver permanent democratization of politics or foster a true economic commonwealth. As The Who sussed it out 26 years after Orwell, the new boss will always end up looking pretty much the same as the old boss.

But because this perception is now probably more widespread than it was in either Orwell’s era or that of the Who, the challenge in re-presenting this material, as Center Stage is doing now, is to give us something neither obscure (many of us are not greatly conversant with Russian history of a century ago) nor obvious. Working with a 1996 script by Ian Wooldridge, but probably more importantly with direction by May Adrales(whose bold and flamboyant work I have seen in the biggest and most demanding shows in two recent seasons at the Contemporary American Theater Festival), Center Stage and its producing partner for this show, the Milwaukee Repertory Theater, have manifestly tried to restore a shocking quality to the story.

One thing they have done is replace the farm setting with what looks like a run-down industrial abbatoir. Theatergoers will likely remember Andrew Boyce‘s white-tiled but crumbling set with smudges that could be dried blood even if they would be hard-put to explain what this setting does better than a barn or something more typically farm-like. Although in the book, the butchering of animals clearly happens away from the farm, here hewn-open carcasses are also design elements.

I think Izumi Inabi’s costuming (for the most part dun-colored jumpsuits and animal masks held in the performers’ hands) was part of the effort to make it vivid, though in that regard it seemed self-defeating to me. The masks are frequently stumbling blocks in the effort to determine what animal is being enacted (some species’ masks look more vulpine than whatever they’re supposed to be), and the drab coveralls rob us of supporting detail. The program notes say Inabi was trying to differentiate animals with various sorts of fabric choices, but if that worked, it did so only on a subliminal basis.

Erasure also threatens the characterizations, perhaps not deliberately, owing to heavy use of doubling and tripling of roles within the 8-member cast, assigned totally disregarding gender. This often leaves one frequently scrambling to follow which character is speaking. (I’m not alone in this perception; it was a complaint of at least one critic in Milwaukee, where the show ran first.)

Though annoying, this is not altogether terrible. In fact it has a definite upside; the overall effect, be it deliberate or inadvertent, is to emphasize the collective impact of the unfolding horror, which is a point of some value.

This adaptation de-Britishizes the tale as well, to coin a term. Orwell’s animals are clearly English, characterized with little touches that mark them as such, and mark their creator as a British satirist and polemicist. Apart from singing an anthem about “Beasts of England,” these animals seem more American than anything else. For instance Squealer (Tiffany Rochelle Stewart), a pig whose job it is to propagandize for the porcine junta that steals the revolution, is given annoying mannerisms delivered in a flat Great Lakes accent, that clearly mark him/her (?) as American middle management.

The universalizing of the tale, even beyond what Orwell intended, may be a legitimate project, at a moment when we seemingly see efforts to perfect similarities to the porcine takeover of Animal Farm in Russia (where the revolution that overthrew Communism has been nearly obliterated by Putin’s mafia), in China (where Deng’s counterrevolution against Maoism is being smothered by a regime singularly devoted to suppressing all free political speech), and even in the United States (where – well, I don’t even have to go there). But if we hand Animal Farm the megaphone, particularly an Animal Farm that has to some significant degree moved beyond the work it adapts, we ideally would hear something that provides new insight into our current perplexities. Word that the powers that be lie and lie and lie is not exactly startling in a world of Russian troll factories and Sarah Huckabee Sanders. It’s hardly Orwell’s fault that he could not foresee our own independently-forged familiarity with the social, political, and human phenomena he was writing about. But it doesn’t make his particular fable one we urgently need to see enacted.

Because of all these choices by the creative team, then, the true selling point of this production is not so much a reimmersion in Orwell’s masterpiece as a reminder, if we needed reminding, of the collective nausea that overtakes us in one of those periodic moments when totalitarian assaults on truth, justice and human dignity are winning.

And it does not hurt at all that, as is typical of Center Stage, the performances are all great. I’ve already mentioned Ms. Stewart, who makes you want to do to her principal character, Squealer, what Squealer, doubling as executioner, does to the hapless defendants in the show trials. (Conveying extreme hateability requires talent.) Other standouts include Stephanie Weeks as (among others) Old Major, the boar whose prophecy resoundingly catalyzes the revolution, Deborah Staples as Clover, a horse who cannot contain her doubts about the revolution, and Melvin Abston (pictured with Ms. Stewart above) as Napoleon, a coldly amoral operator who emerges as the top pig in the revolutionary scrum. But the entire cast is competent and, perhaps owing to the previous run in Milwaukee, extraordinarily tight.

The cast is also typical of Center Stage in that not a single performer has ever played on this stage before. I have mentioned more than once this company’s reliance on a New York casting agency and its very spotty reliance on local talent. As Center Stage goes through a changing of the guard at the Artistic Director level, I hope we can see a change in that regard too. Surely a company that once nurtured the talents of Terry O’Quinn and Christine Baranski by giving them multiple roles, allowing them and local audiences to grow in tandem, is capable doing similar things again. We should.