A Community’s Accomplishment and the Homosexual Gaze: ALL SHE MUST POSSESS at REP Stage

A Community’s Accomplishment and the Homosexual Gaze: ALL SHE MUST POSSESS at REP Stage 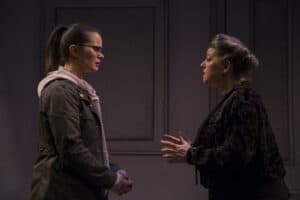 Posted on the Baltimore page of BroadwayWorld.com February 10, 2018

There are, in the end, only two kinds of accomplishment in life: obtaining gratifying experiences and leaving behind deeds and objects of value. All She Must Possess by Susan McCully, receiving a world premiere at The REP in Columbia, is about a quiet woman and a somewhat noisier community who collaborated in both kinds of accomplishment.

The woman, Etta Cone (1870-1949), together with her sister Claribel (1864-1929) was an important acquirer of works of Matisse, Picasso and Cézanne, among others, building a collection of 3,000 pieces that the Baltimore Museum of Art describes as “the crown jewel” of its holdings. And her life was blessed and enlarged by her inclusion in poet Gertrude Stein‘s circle in Paris, a circle whose members included artists whose works she and Claribel collected. Her relationship with Stein most likely included a brief spell in 1905 as lovers, teasingly touched upon in the play, a connection disrupted by the 1907 arrival of Alice Toklas in Stein’s life. All She Must Possess is perhaps at its most touching depicting Etta’s getting on with life and continuing with her collecting after rejection and mistreatment at Stein’s hands, and after the death of Claribel.

The play does not suggest that the collection was Etta’s work alone, but rather depicts it as the emanation of the entire community, including not only Etta (Grace Bauer), but Claribel (Valerie Leonard), Gertrude (Valerie Leonard again), Gertrude’s brother Leo (Nigel Reed), Alice Toklas (Teresa Castracane), and the artists, for whom Matisse (Nigel Reed again) stands in as representative. It was out of that community’s joy in creation and discussions of it (Expressionism vs. Cubism, for instance) that the collection, a thing of transcendent value, is shown as having emerged, with Etta’s role as being the primary shaper of the final product. But the play is generous in giving all of these participants in the joint creation some “screen time” in which to demonstrate their contributions to the enterprise, whether it be Leo’s joie-de-vivre, Matisse’s artistic exuberance, Gertrude’s self-assuredness in exploring the limits of what speech can do, or even Alice’s bitchy possessiveness as Gertrude’s helpmeet.

There is more to the play, however. It is also a work of meta-theater in which a character called only The Writer (Keri Eastridge), a 21st-century lesbian, transparently something of a stand-in for playwright McCully, confronts and interrogates a spiritual predecessor (illustrated above). That predecessor cannot be said to be a totally satisfactory interviewee, as when Etta playfully refuses to be specific about what may have happened sexually between herself and Stein. This matters much less, the play seems to suggest, that what ended up adorning the walls of the sisters’ Baltimore apartment and later those of the Baltimore Museum of Art. Having started the meta-theatrical hare, McCully also loses control of it, in what I take to be a bit of Pirandello-esque fun surrounding who is in whose play, which is not badly done but does not seem to belong in this play.

What insight emerges comes less from what is said between The Writer and Etta and more from the characters’ interplays with the works of art sometimes projected within frames at the back of the set. We get a sense of the effect upon Etta (and one presumes upon Gertrude) of Matisse’s Blue Nude, originally acquired by the Steins, and later by the Cones, a work immediately criticized upon its appearance in part because of the androgynous nature of the body on display. Indeed, the nude comes alive on the wall (portrayed by Teresa Castracane again), and Etta’s longing for the Nude to look up and establish eye contact and presumably other contact is interestingly established in the Blue Nude’s seductive speech. The androgynous nature of Michaelangelo’s sculpture Night also figures in the play’s exploration of the intersection between art and the homosexual gaze, both Michaelangelo’s and Etta’s.

The centrality of the male and the female homosexual gaze to what The Writer seems to be gleaning from her encounter with Etta underlines what I think was a mistake in the casting of the play. This was the choice of Valerie Leonard to bring us Gertrude Stein, who was not only a gay icon but specifically a butch icon, a perception attested to by many queer critics and scholars. Leonard first appears and continually reappears in the play as Claribel Cone, a tall, queenly character of conventionally female appearance, apparently deliberately to contrast her with the far less regal or conventionally feminine Etta. From side-by-side photos, the contrast of the historical Claribel with the historical Etta does not seem so profound, but this is theater, and liberties may be taken. However, with minimal time to switch costuming, hairstyle, or makeup, Leonard cannot easily transition back and forth from her portrayal of Claribel to that of Gertrude. She tries to move with suggestions of corpulence when being Gertrude, but that alone is not going to evoke Stein’s stunning appropriation of conventionally male appearance, key to her iconic appeal and probably to both the historical Etta’s and the dramatized Etta’s sense of attraction to her. (To say Leonard cannot do the impossible is of course not to impugn her considerable skill as an actor. But even in an era of nontraditional casting, the immutable corporeality of a performer sometimes matters a lot.)

While the play therefore does not hit every mark for which it aims, it hits far more than enough of them, particularly in the way it traces the trajectory of Etta’s failed romance with Gertrude. And for Baltimore-area audiences, the play serves as a vital reminder of an indelible piece of our heritage: a locally-situated collection assembled by a small community including four emissaries from Baltimore (Cones and Steins) to the great world outside.